Now Dublin has many fine bars and establishments. The streets are paved with quality pubs, each offering a wide selection of Whisky and Whiskey to enjoy, although there is one problem; they have a bit of a lack of world whiskies on show. However, I am nothing if not resourceful, so today’s World Whisky Wednesday will be of a whisky I tried back when I was still in sunny Scotland. Presenting, the Sullivans Cove Double Cask, the special bottling from Whisky Alement. I managed to try this at a tasting event run by the fantastic Julian White (Jules) of Whisky Alement, Australia’s finest Whisky Bar, alongside the Hobart Whisky 1st Release, Fleurieu Atlantic Crossing and more. Now while being from the award winning Tasmanian distillery (World’s best Single Malt 2014 thank you very much), this whisky was also made with Jules’ own input. A blend of 80% American Ex-bourbon and 20% French Oak previously containing Aussie Port, the whisky comes from a hard day of Jules sampling and blending whiskies at the distillery with Heather Tillot, production manager of Sullivans Cove, and was released for Tasmanian Whisky Week of 2018. So in all ways, it is special, however if you want to try some for yourself you might need to take a long journey to the hotter part of the world. Or just pester Jules with requests to do a tasting. I’m sure either would work. 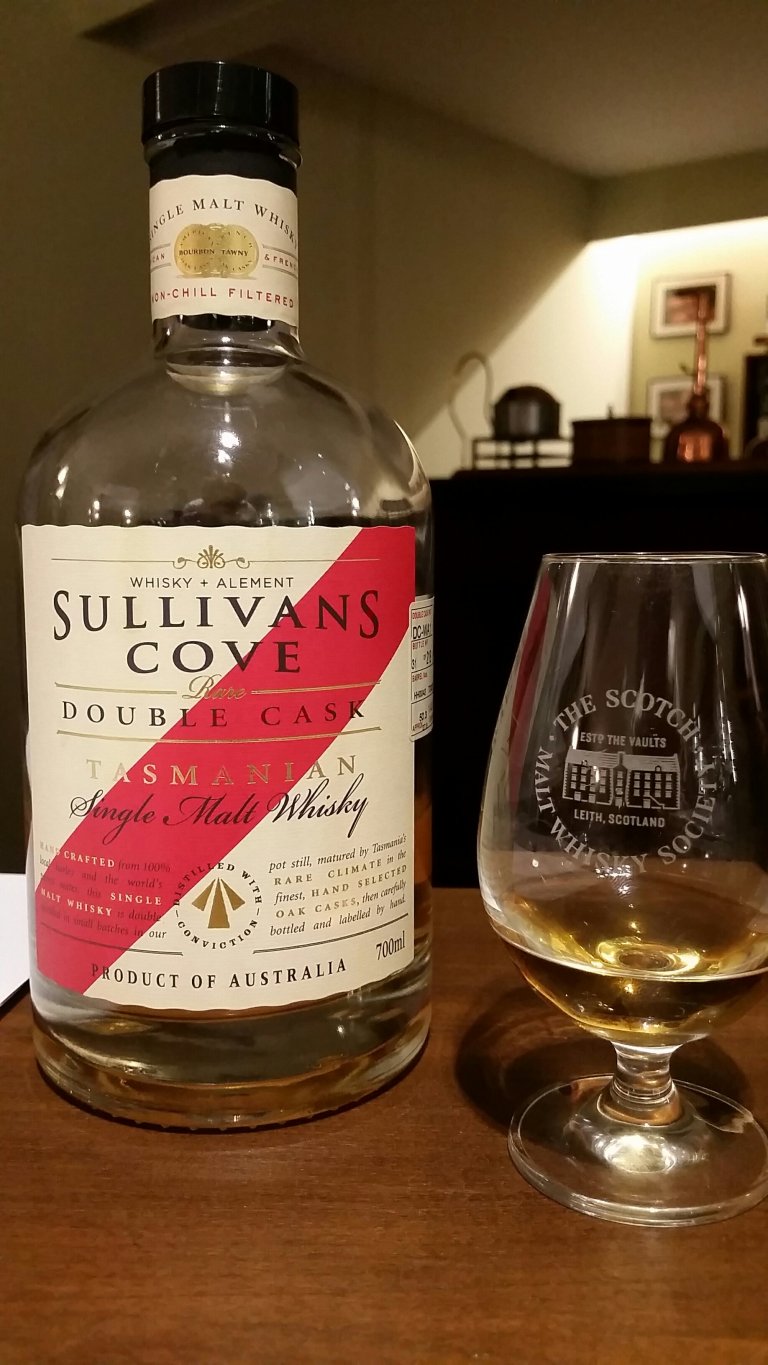 The nose is a confectionary treat when opening, full of Hubba Bubba bubblegum, good old fruit tingles, star burst cherry and strawberry chews and grapefruit jelly. It turns a touch after that, to a distinctly different fungus, sous bois appeal. While out of place at first, it lulls you down to a very relaxed state and is a welcome addition. After that, the ex-bourbon comes through and showcases its own range of clotted cream layered onto a poached pear, with a boiled plum atop the lot. With no scones in sight, we threw that onto a fluffy marshmallow and slathered on some orange marmalade. My mouth is watering just thinking about it.

Now sipping the whisky is a different experience. It hits notes of damson jelly, with goose fat and smoky tomato puree with a shaving of basil. I’ve no idea where it came from, but it really hit the spot. Next it passed out a tray of plum tarts, and opened a door to some lovely milk chocolate melting under an Australian sun, before devouring first fresh and then dried stone fruits; plum, cherry, nectarine, peaches and mango just fallen off their trees before they were shaved and dried into fruit strips. The finish lingers on and on and on, revelling in smoky fruits and Christmas cake.

This was a guessing whisky, in the sense that I had no idea what was going to happen next. Instead of going one way, it jumped the other, then ran circles around me. I was caught off guard by the nose and taste more than once, and while my initial reaction was confusion, once I let myself go with the flow the whisky rewarded me with more exciting tastes than I thought possible. Over all, it was a damn fine dram, and I found myself hoping the person next to me wasn’t going to finish theirs. Personally I can’t wait to see more expressions such as this, from Sullivans Cove, from Whisky Alement, and from whisky everywhere. Jules and Heather, you have a truly amazing creation with this whisky. Cheers.