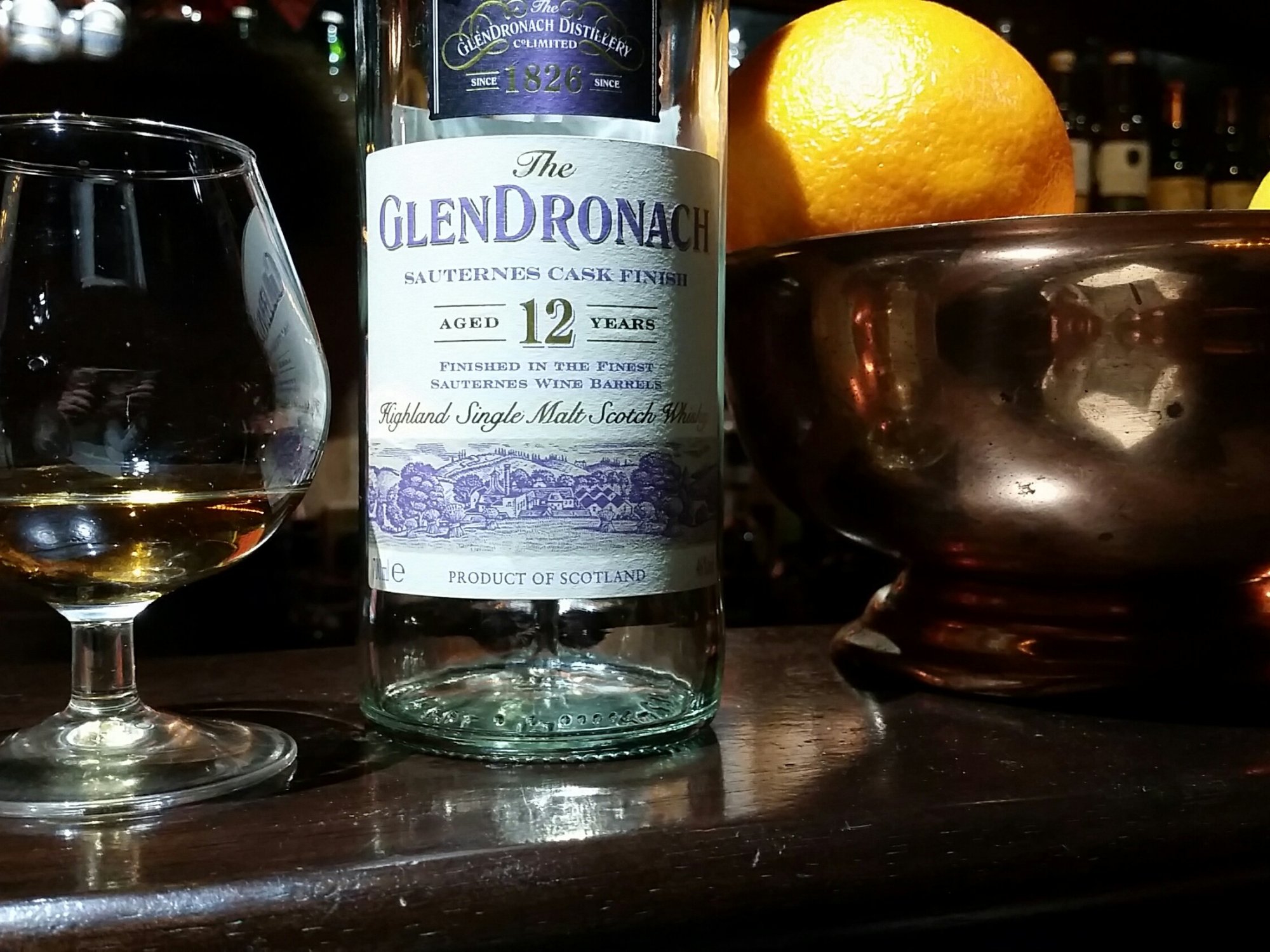 As a large cat once said, I hate Mondays. It’s the start of the week, the weekend is a sweet memory behind you, and suddenly life comes hurtling towards you at Mach speeds and you realise “oh damn, I have bills to pay”. It’s not the best feeling, not at all. So when I rested my head in my favourite bar after work this evening, I needed something sweet. Something silky. Something smooth, but mostly I needed something that I could drink and forget the day behind me and the week ahead of me, something I could drink and reminisce about easier days and times. So when my bartender looked at me and immediately plonked this in front of me, that was a nice feeling. Recently I’ve been inundated with Irish Whiskey, and while that’s not bad thing it was nice to have a brief change of pace. The Glendronach 12-year-old Sauternes cask finish glinted gold and promising in the bottle, and when the dram was poured I was assured by my bartender it would be the best thing for me. Plus, as there was only one dram left, a few extra drops fell into my glass. Bottle kill for the night. 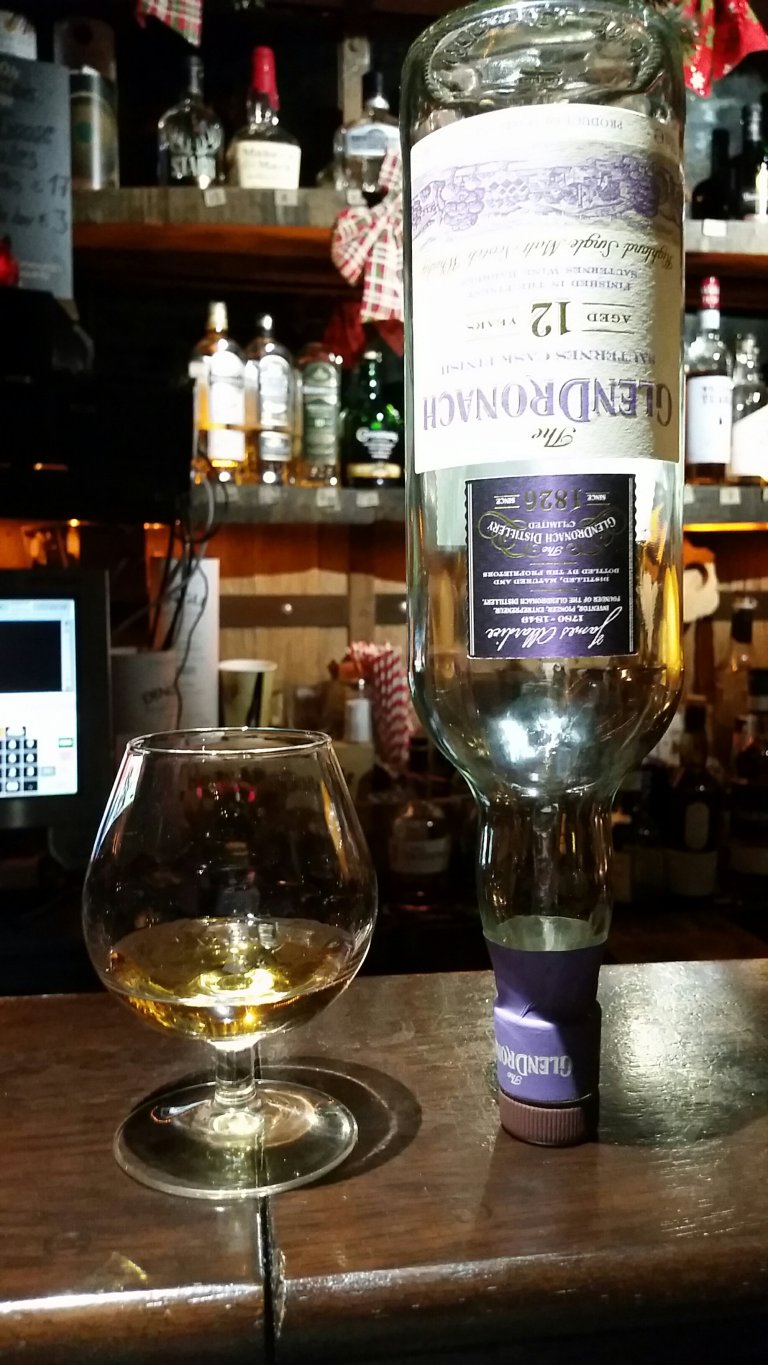 For those who don’t know, Sauternes is a desert wine made when wine grapes are infested with botrytis, the noble rot. If conditions are right, the mould weakens the skin of the grapes and extracts much of the moisture, leaving concentrated sugar. The resulting wine made from these grapes are known as botrytized wines, and are particularly sweet and tasty. The Glendronach 12-year-old Sauternes finish is a replacement for the previous 14-year-old, and is matured first in European oak after which it was laid to rest for a brief period in ex-sauternes casks. Bottled at 46%, the finish in Sauternes cask has pushed it to find new fruits and exciting flavour. 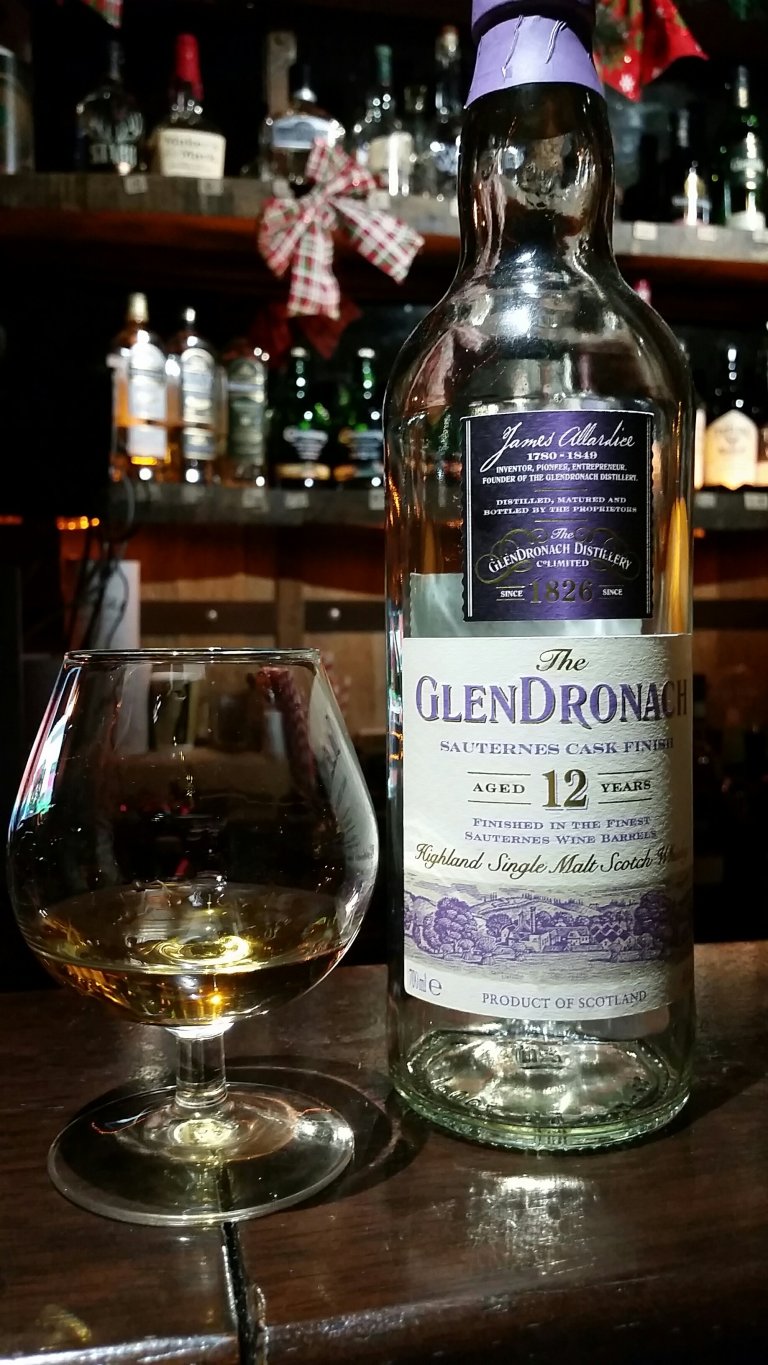 Oh, I loved this nose. Touches of vanilla and white roses coaxed me in, and before long I was burying my nose into a ripe apricot and mandarins before tucking into a sandwich slathered in honey. Honeydew and rock melon, poached pears and a ripe peach burst through with flavour, and the scents left me grinning. The fruits weren’t all that were on offer though, as suddenly I found myself drinking an old fashioned, heavy on the orange, with the zest and oils spraying over a nearby bowl of mixed nuts.

That first sip was incredibly smooth and silky on the front, pouring Manuka honey over the tongue as I ate a spoonful of orange marmalade. Fried mushrooms shone through, dancing over the torn remains of the white roses, now lightly charred by a fire that was roasting the pears. Gooseberries, apples, almonds, vanilla yogurt with spice and berries dusted over the top. The finish was lengthy and slow, moving through dried apricot to stewing peaches and lightly tannic wood before ending on the same Manuka honey note we began on. Tongue smashingly tasty.

I wasn’t sure at first when it was put in front of me to be honest. I was tired, and thought it may be too excited a dram for me to focus on, but as I let myself get lost in the whisky, it really did make me forget that today is a Monday. Half way through the dram, Lou Reeds Walk on the Wild Side came over the speakers, and it really did set the stage for the whisky. It was good, and what I needed. I feel as though the youth of the 12-year-old is more suited to the cask finish than the previous 14, with some remnants of new make character playing well with the Sauternes, allowing the whisky to be multi-faceted and more engaging. On the off hand, the whisky did start to grow tannic on the palate if rested for too long, but that was a small price to pay to forget it was Monday for a while.