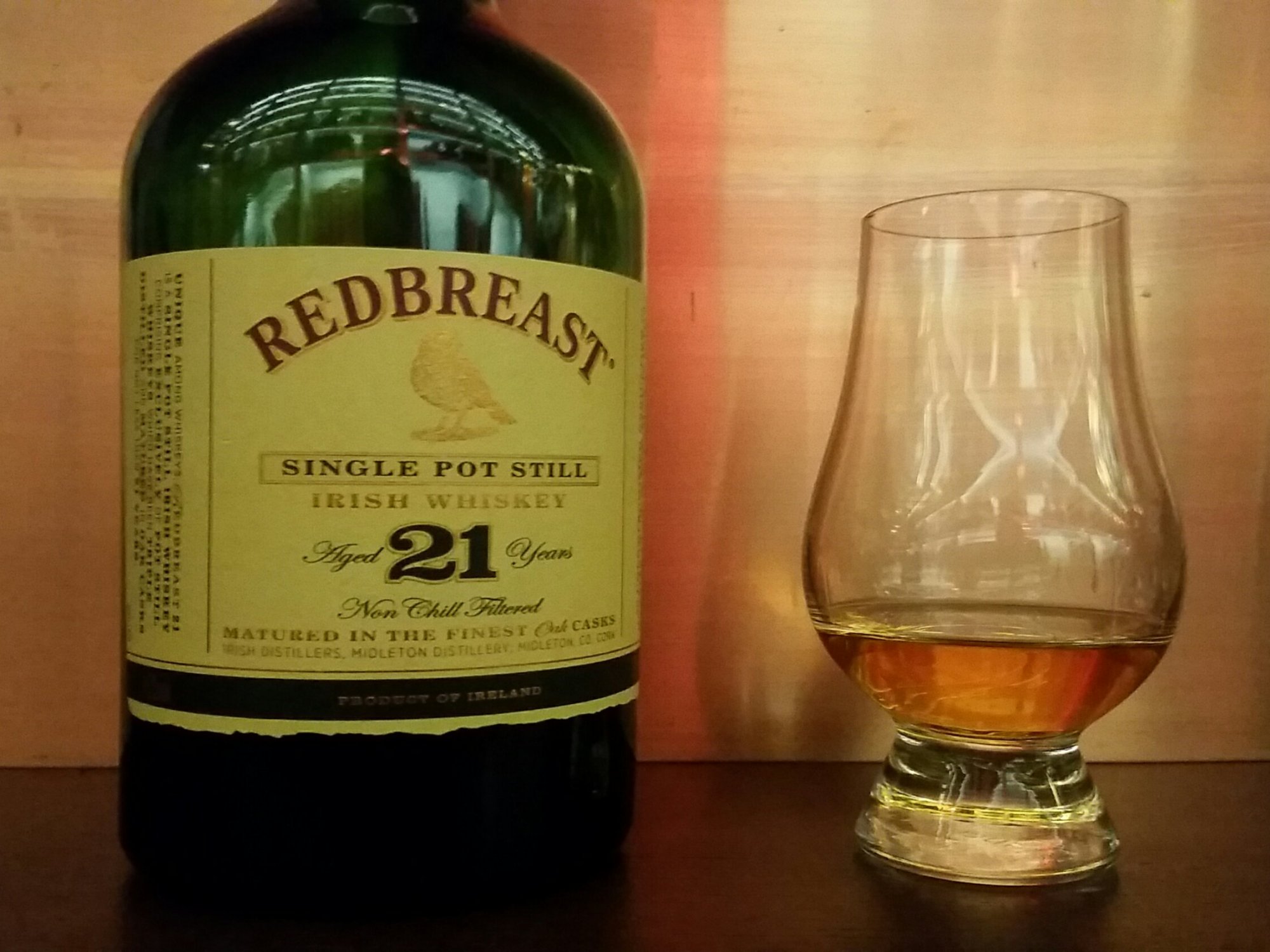 How is it that I have yet to review this whiskey, I asked myself earlier today, staring at the bottle. I then recalled; I have attempted to review it before, but the sheer silkiness and complexity of the whiskey made my pen fall by the wayside as I simply enjoyed a good whiskey with no reviewing involved. Today however, I have promised myself I wouldn’t get so distracted by the taste that I would forget to take any notes. So the Redbreast 21 Year Old. 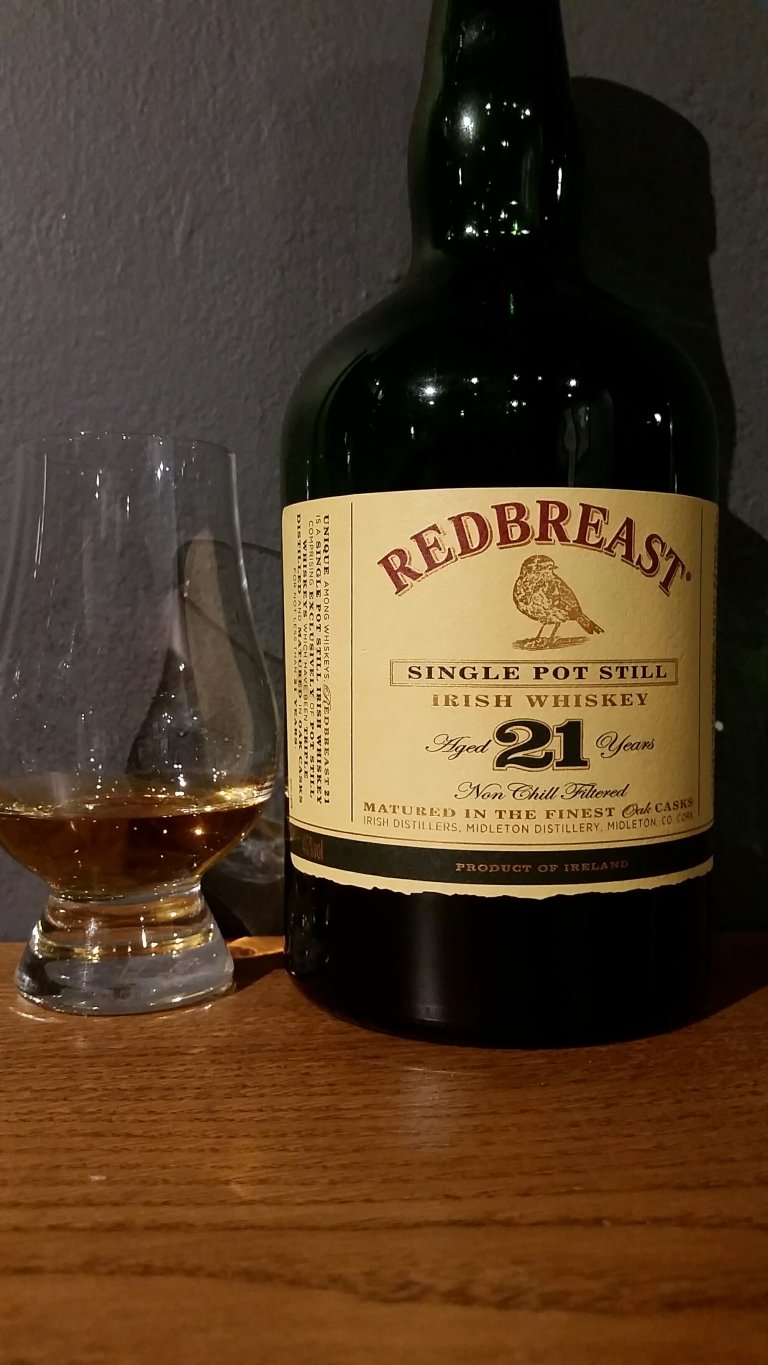 Triple distilled in the traditional pot still method at Midleton Distillery, the Redbreast range utilises both malted and un-malted barley, an Irish method of distillation originating in the late 16th century when a tax was imposed on the amount of malted barley used. It’s a sad fact that most pot still whiskies have fallen by the wayside, as this method creates a much more impressive taste and mouth feel than a standard 100% malted barley. On the bright side there are now many more single pot stills being released (see my Teeling Pot Still Review here), with a promise of much more to come. The 21 represents the oldest in the Redbreast range, and bears the proud lettering on the bottle of being “the definitive expression of Irish pot still whiskey”. It’s a big statement, but damn if this whiskey doesn’t back it up, and has been the proud and deserving recipient of many awards, including Irish Single Pot Still Whiskey Gold Medal Winner in 2016 and 2018, Best Overall Irish Whiskey in 2014 and 2015, and I am sure the praise of many a drinker. Matured in a combination of American Ex-Bourbon Barrels and 1st Fill Oloroso Sherry Casks, the whiskey flows seamlessly into the glass at 46%. 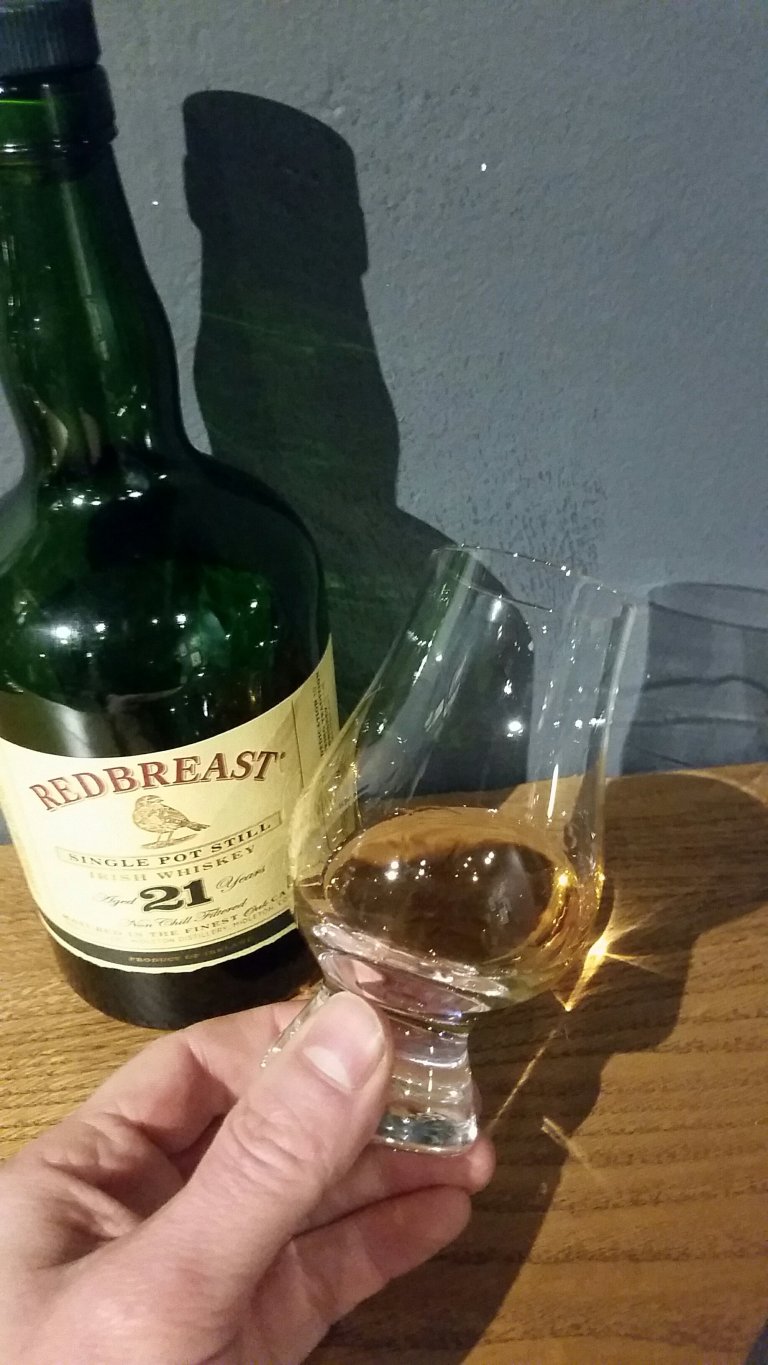 We open to a redolence of lychees, rich honey, honey dew lemon and heather floating over grilled pineapple rings. Dropping down we find Roobois tea, raspberries and perfect malt biscuits, with low spice of boiled cinnamon sticks, reminiscent of an older and more refined Armagnac. The nose ends with a touch of apple shampoo, spiced soap, and a feeling of snacking on peanuts in a leather armchair.

The definitive pot still indeed, the mouth feel is that of drinking in the music of Nina Simone, Sinnerman does not go astray when sipping this whiskey. On the palate we discover a bounty of cherry slice, chocolate drizzled over mango, guava, lychees, tangerines and toasted grapefruit. A backing of passion fruit and old nutmeg keeps the whiskey interesting as we find an old tin of coffee grounds, fried kiwifruit and orange zest. The finish is long with slow building spice, vanilla curds, sweet roasted carrots before a warming residual mouthfeel.

Tasting it again makes me realise why I could not keep a hold of my pen the first time around. The whiskey is a sublime example of what Single Pot Still, and Irish Whiskey has to offer, and exceeds the boundaries one might place on most whiskies. While it may not have the most accessible price tag, it is a whiskey to be bought, savoured, and shared with close friend who want to try something that will lift their spirits everyday of the week. Now I just need to save for a bottle myself.