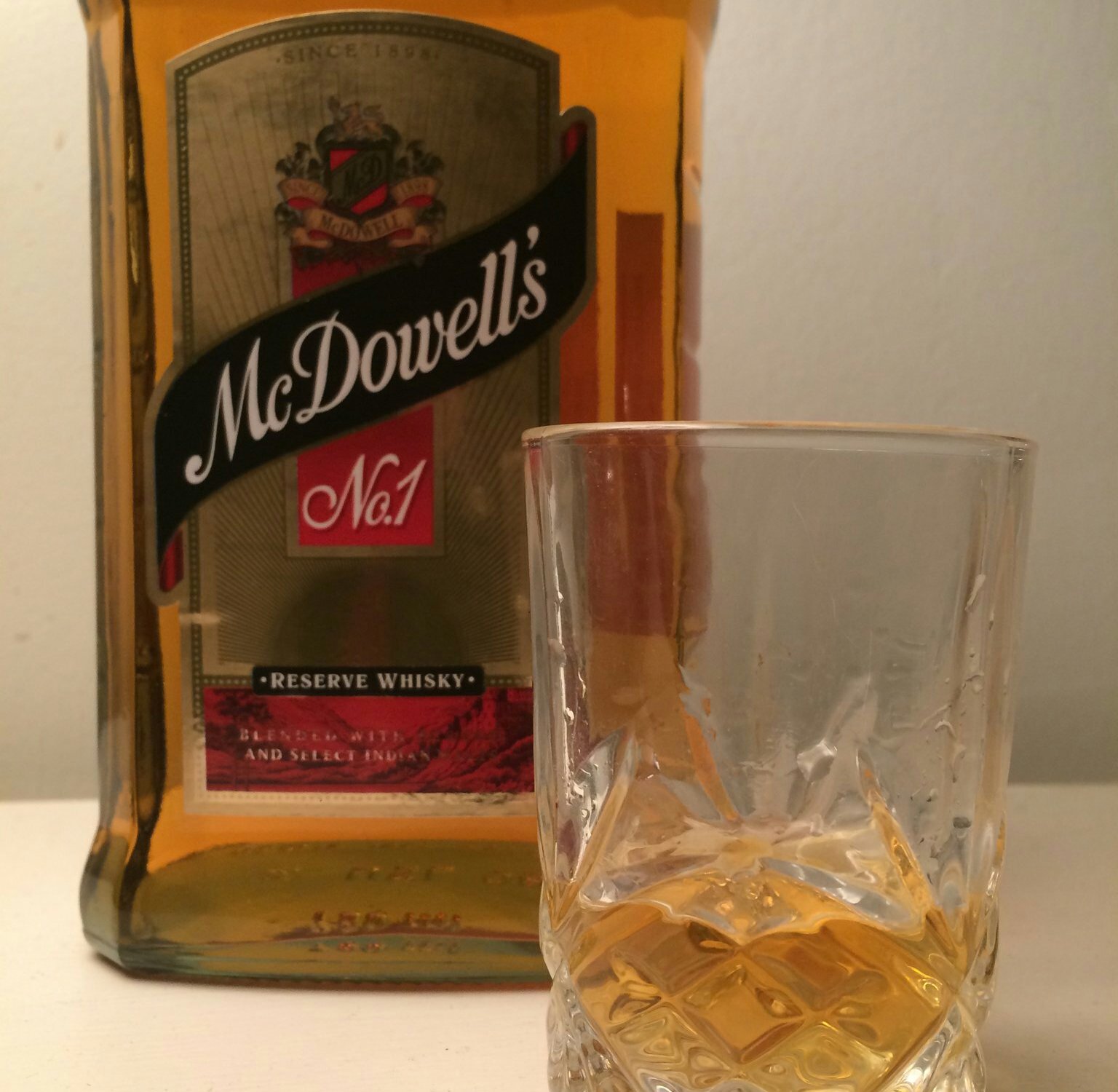 Happy World Whisky Wednesday everyone! The next few weeks are something special; my good mate Whiskey Nut (@2DramsofWhiskey) recently sent me three blind samples of whiskey, labelled A, B and C. Over the course of a few days I did blind tastings of the lot, and will be giving a damn honest opinion of each of what I had (Spoilers, one of the whiskies was awful). After I was finished I sent him a message, and he revealed the whiskies to me. Sample A was none other than the McDowell’s No.1 Reserve Whisky.

McDowell’s No.1 comes to us from McDowell and Company, India, and is blend of imported Scotch Whiskies as well as Indian Malts and Grains. The Best Selling whisky in India, McDowell’s has long been a fixture on Indian shelves, but in 2013 the Spirit Giant Diageo purchased a controlling 54.8% interest in the company, and McDowell’s has started appearing in more countries since then. If you haven’t seen a bottle around your way, expect to at some point in time. And if you think this to be a small time operation, think again. The McDowell’s No.1 brand made sales of $3.8 BILLION in 2013. Damn. That’s a lot of whiskey. Speaking of which…

On our nose, I was took my time. At first there were notes of lead paint and pastels, underlying hints of glue and sweet sulphur alongside boiling cabbage and copper. Earthy dirt, dust, a moulding fallen tree, as well as some sweeter cooking onions leading into grass and hay. It wasn’t a great nose, but I was willing to give the whisky some more time, and it got a bit sweeter, with artificial sugar coming through the longer it sat in the glass.

While the start of the palate is quite acetonal, the palate continues the  artificial trend, but has a firm woody background that allows us to over see these treats; caramel cubes, raspberry bonbons, lemonade jelly beans and a distinct hint of E150 dropped lightly over everything. I kept thinking to myself that it was artificial, but that wasn’t a bad taste to my surprise. It kept up with a merry smile, and was quite pleasing. The finish is long, quite sweet, and gains clarity with fresh mown grass and caster sugar over candied dandelion. It’s a mixing whisky, no doubt, the sharp start is a bit confusing to the palate, but the finish is delectable and what we’re there for.

It funny these preconceptions you have about whisky. If given the chance to try the McDowell’s, I would have, but I would’ve gone in with raised eyebrows and a narrow mind. Having the chance to try it blind really did help me see some different things about the whisky, and to be honest its not bad at all. In recent weeks and months I’ve had much poorer whiskies from more well established Distilleries and countries. Well worth a try if you ever see it around. On another note, should you get the opportunity to share some drams of whisky with friends, why not try the way @2DramsofWhiskey has done it? I do love a blind tasting, and look forward to my next chance to this again. @2DramsofWhiskey, I’m raising my glass tonight to you.

4 thoughts on “McDowell’s No.1 Reserve Whisky”