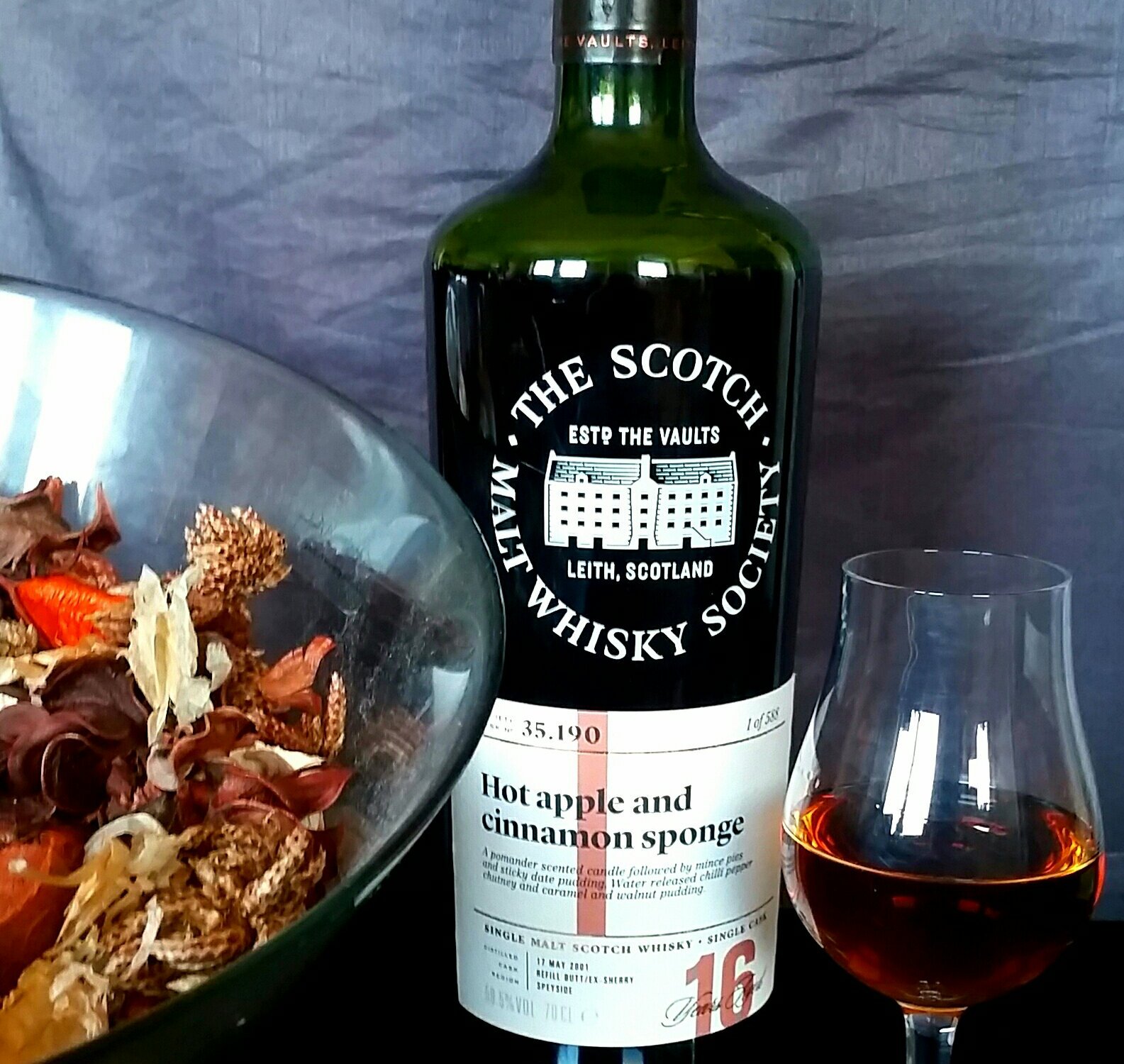 It’s good to visit Edinburgh every now and then. This time, I am over to spend a nice few days with my partner in crime Some Whisky Lass, who happens to be watching over my bottles while I am residing in Ireland. One of the lucky finds I stumbled across while digging through the boxes was this wee little gem from the Scotch Malt Whisky Society, the 35.190.

For those not in the know, the Scotch Malt Whisky Society (SMWS) is an independent bottling society started in Edinburgh back in 1983. Simply put, they purchase casks or new make spirit from distilleries before shipping those to their maturation warehouse. There, it is kept, tasted once every few years until the tasting panel passes the whisky, when it is released. You’ll notice that the name of the distillery is not mentioned, the Society uses a numbering system; the first set of numbers representing the distillery, and the second set stating the cask number from that particular distillery, so 35.190 is the 190th casks purchased from the 35th distillery that the Society ever bottled from. While the society doesn’t state which distillery is which number, a full list could be found online if you look hard enough, this particular bottling comes Glen Moray. Single cask, cask strength, non-chill filtered, no added colouring, the whisky is the closest things you can get to coming straight from the cask. Due to the single cask nature of the whiskies, each is limited to a set number of bottlings, ranging from a few dozen to a few hundred. This for example is one of 588 bottles, 16 years old, and matured in refill ex-sherry butts, one of many unique bottlings released by the society every month.

Our nose starts slow at first, but grows larger every second, the cask strength of the dram (59.5% by the way) unfurling steadily with each nose. Candle wax move further into apple pie, over boiled vegetables and chilli caramel. Marzipan makes a good base, but as the nose continues we see move of the sherry bomb moving into the range of chorizo, figs, potpourri, burger rings and twinges of hoi sin sauce. It’s an autumnal and winter dram, and seems best to sit with by a fire to warm on the outside with a nice blaze warms the inside. A few drops of water bring out the marzipan once again, sweet raspberries and roses. The sulphur drops away nicely, leaving more of the whisky to be appreciated.

The palate has a thin and somewhat bitter mouthfeel, the sherry leaving a lasting dry impression that strips the palate, somewhat distressing at first but allowing the whisky to evaporate cleaning on the tongue. The chilli comes back, this time accompanied by dark chocolate, crispy rose petals, charred plums, hoi sin sauce and a nice duck rolls dipped in oyster sauce. It grows thick and heavy after a time, the sherry becoming all the range of the whisky; punchy dried dark fruits, more dark chocolate, cayenne pepper, capsicum, and cloves, before becoming increasingly tannic. The finish is oddly short however, the stripping and drying of the palate shortening the finish to end with intense spice, liquorice and plums. With water, we see a cleaner dram that showcases raspberry liquorice, rosewater, lovely apple pie and a decadent trifle.

Normally I don’t add water to my whisky, as much as I know I should, but I felt I needed to with this one. It wasn’t the cask strength of the whisky, more than anything I quite enjoy a lovely cask strength. It was the sherry. Now, let’s get one thing straight, the whisky was delightful. Well balanced, a beautiful length, quite intense, and increasingly complex as we look at delve deeper into the dram. It scores high across most of the BLIC scale, but here’s the thing; it’s the intensity of the sherry cask that lets it down. It’s too intense, a sherry bomb becoming a sherry nuke. The sherry moves through way too heavily, to the point where the distillery character is all gone and we start to see sulphur coming out of that cask. 14, 15 years would have been a great time for this whisky, but 16 years heavily is just a touch too much. Water works best with this one folks, enjoy finding the joys that SMWS has to offer.