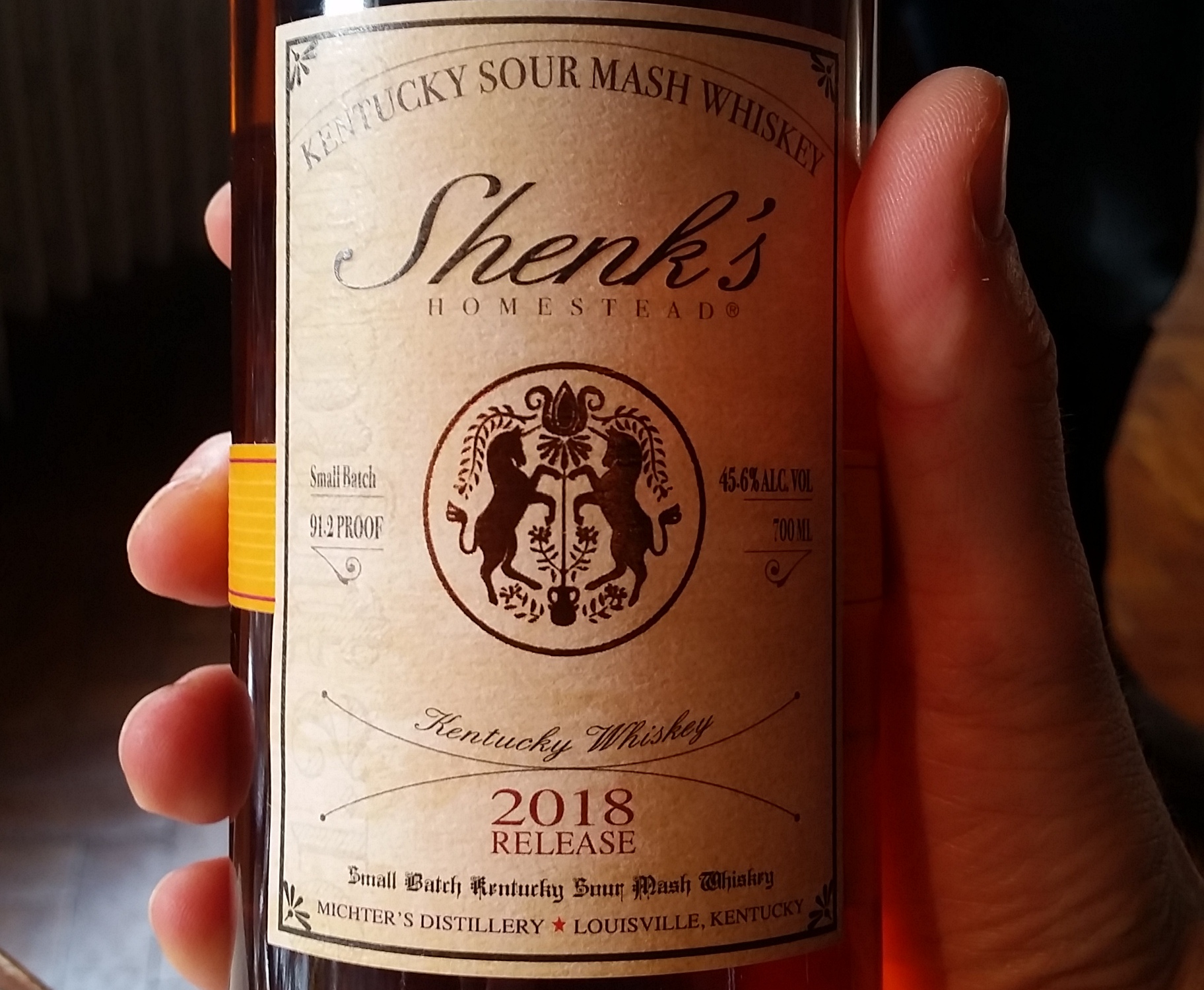 So we come today to the Shenks. You’ll note that this review is a bit later than the norm, and the pictures without the usual glass, but I had planned to review something at the airport before my flight. Unbeknownst to me, Edinburgh airport stops serving at 8PM for some insane reason. Still, they let me through with a flask, so there’s that.

About a week ago I was invited to a Michters Whiskey tasting. A brilliant night, and something I’ll hopefully do a write up on soon, the Shenks was the standout to me, and as the distillery was originally known as Shenks I thought we’d start at the beginning. So. Established in 1753 as Shenks distillery, what is now Michters has gone through a vast array of changes, with two name changes and also a bit of a move, originally established in Pennsylvania but now in Kentucky. The Shenks itself is a homage to that early time, with the distillery looking back to create as well as looking forward. While the distillery is now producing stock today however, this bottle comes from an unnamed Kentucky distillery on what was known as a “Michters Day”, where they borrowed the distillery to do a touch of their own distilling. An NAS Sour Mash Whiskey matured in what I have been told is ex-bourbon and then French Oak, the Shenk Whiskey is interesting enough and has had its fair share of publicity, good and bad, but it’s what in the bottle and glass that counts. Note this tasting was completed with bottle 323 of 1810 from the 2018 release.

So we start with a thick nose of cream, butter, frying bacon and nutmeg over oranges, a touch sulphuric but it does wonders for the Whiskey to rise out of the glass. Honeyed wood springs to mind as well, not too much to be over whelming but works along side that sulphur. Then we hit the vanilla and cremem brulee, but it comes off a bit burnt.

On the palate that sour mash really hits us hard, somewhat tempered by the French Oak. Nutmeg again, with more grapefruit, corn mash, heavy brown sugar, bubble gum and scorched ash gum wood. The leather of the French Oak gets pronounced, and its comes off as a bridge between Cognac and Whiskey. Its only after the wood that we see the maple syrup start to run however, which is a brilliant addition but needed to appear earlier. A long finish, good tobacco notes, cinnamon, citric rind and vanilla base.

I quite enjoyed it. Good flavour, neither overly complex or simplistic, but the sour mash struck a tang with me I can’t really get on board with. The French Oak was an interesting touch as well, and feels well placed to hide some of the sharper tones of the Whiskey. The main problem lies not with these Whiskies though but with their future. The gents at the distillery have assured me that what they have maturing will match these sourced Whiskies perfectly, though we’ll have to wait and see for that. In the meantime though, the Shenks is a nice way to spend an afternoon, and does bring a good amount of spice to the table. Plus, it works perfect in an Old Fashioned. Now if you’ll excuse me, my gate appears to be closing. Dublin, I’ll see you again soon.