Let’s get one thing clear here; Somewhiskybloke is not a fan of Macallan. I know, I know, they’re arguably the leading premier Scotch producer in the world, the drams are nothing to sneeze at, but I am not a fan. The whisky just never sits right with me as someone who balks at the taste of heavy sherry casks, and their understanding of the second hand whisky market is purely diabolical, if a touch brilliant on the other hand. However, I have been tinkering recently with putting aside subjectivity and focusing on objectivity. Subjectively, I’ll pass on Macallan most of the time. It’s just not for me, and I cannot understand the hype. Objectively however, they make a quality drink, using good practises, good ingredients, good methods and some of the world’s best casks. It’s everything I want to hear about a whisky, even if it’s attached to a brand I can’t get behind. Having said that, if I ever got the chance to try some of the older drops, I would jump on it. Most folk are hypocrites like that.

So the Macallan Triple Cask. 12 years old, matured in a combination of European Sherry Oak, American Sherry Oak, and ex-bourbon barrels (American, obviously), we see here in the whisky what goes into making a world class dram. The sherry casks are seasoned with Oloroso for 18 months each, Macallan leasing the Sherry (it’s all about the casks) and the ex-bourbon wood coming from the East coast of the States. Should you find yourself venturing into Spain and seeing some Sherry Bodegas, you may note some of those casks branded with MAC, casks destined for Macallan and their distillery and warehouses. And damn, what a distillery. Affectionately nicknamed “Telly Tubby Land” by fans, the new distillery has an annual capacity of 50 million litres per annum. That’s a lot of whisky. Using the Sherry casks often works in Macallans favour, their squat stills make for a very nutty and sometimes sulphuric spirit, melding well with the natural Sherry cask tones. Once the slumbering spirit has spent 12 years in their separate casks, they are married together to create the triple cask, along with the rest of Macallans range. The Triple, Double and Sherry cask range was released recently enough, and has now replaced the Sienna, Amber and Ruby. As I wasn’t a fan of any of them, I was curious to attend a Macallan tasting recently, and chose the Triple Cask to review. Why that one? There was a bottle at my table. 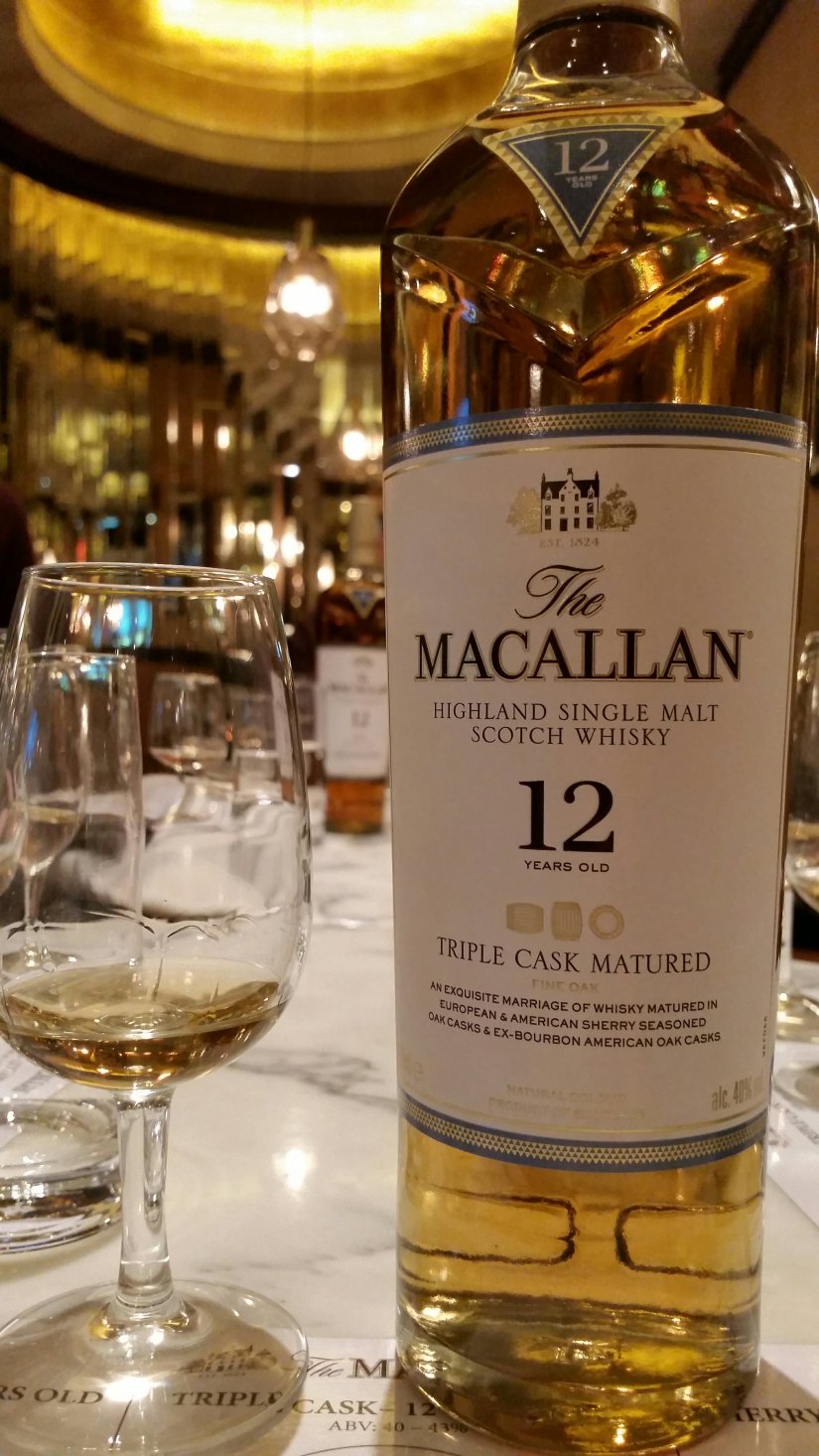 Even though the dram is not peated, we get tinges of soft leathery smoke rising from the dram before the spice kicks in; cinnamon, smoky paprika, nutmeg all mixed in with some BBQ sauce. While the signature sulphuric spirit is there, it carries itself well, copper into oak, great tall planks of it toasted and charred around us, some cedar wood and then hints of a light burning incense alongside grapefruit and orange rind. Once the initial hit passes, it’s into the vanilla, with crème brulee, vanilla toffee on gingerbread, and then macadamia comes in. After we let the dram breathe it gains clarity, the vanilla turning into a melted white chocolate, that same flame crispy some vanilla bean pods, then into orchard fruits of poached pears, apples, peaches and grapes. It all finishes with dried fruits; goji berries, dehydrated apple now, pineapple crisps and a scattering of sultanas.

Our palate is citrus and ginger bread, a vanilla base hidden beneath the wash of grapefruit and lemon juice holding that cinnamon and nutmeg stirred in with a leather strap and garnished with light rose petals and coconut husk. The macadamia nuts come back with crushed cashews, before a long finish, mouth puckering ginger nut biscuits and lemon juice and hints of cloying clove moving through right at the back. While not any score against it, the natural nutty and volatile Macallan is evident, with the palate and finish being spicy and sulphuric.

Subjectively, I was not a fan. Too much spice, too much leather, and while the palate was interesting it was the nose that we were there for. Objectively, I can see the appeal. The dram moves steadily through motions that feel time honed and very well practised, and that smoky leather strap really keeps any of the other flavours from stepping out of line, making a brilliant board of flavour. If we use the BLIC method (Balance, Length, Intensity and Complexity) it would score roughly 3.2 of 4 in total, losing a few points for the balance and intensity but making it a brilliant whisky. While not a dram I would recommend to a first time whisky drinker, neither on my own opinions or the whisky’s own merits, it is definitely something I would keep in the house for that friend of mine who always loves their spice.