Here’s to our first World Whisky Wednesday of 2020! Discussing whisky from all over the world, this Wednesday we find ourselves looking at a French whisky, more specifically the BM Signature Pure Malt of La Rouget distillery. It’s a wordy one today folks, and gives us a chance to deep dive into some specifics with whisky.

La Rouget Distillery has its home within Bletterans of the French Jura, eastern France, just northeast of Lyon and touching the Swiss border. Originally a brewery, La Rouget started in 1994, producing many styles of beers. All of this, from the brewery to the distillery started with Bruno Mangin and his wife Roselin. Bruno trained as a cook from the age of 16 before travelling the world and returning to France, where he and his wife opened their concept restaurant centred around beer, before deciding to producing their own range. From there, the jump from beer to whisky is a simple one, with the distillery and maturation cellars onsite. The stills first ran in 1999, with a regular distillation since 2003, and La Rouget uses for the signature malt a 100% malt beer for the wash.

You’ll note from the title however that this is not is single malt, but rather a pure malt, a signature malt. Why have they named the whisky such? A brief look at the definition can shed some light.

So, why do we say a pure malt when speaking of BM? Its 100% malted barley, and distilled in a singular distillery, but there’s something else there: copper pot stills. La Rouget uses not copper pot stills, but instead Armagnac stills dating from the first half of the 20th century. These Armagnac stills originate from Gers, 1937, the original distillery being bought by a larger company and abandoned. La Rouget bought and modernized these stills on the burner level, though all other parts are original. Copper pot stills use a batch distillation, whereas the Armagnac stills use a continuous run, and as per the French models and regulations single malt can only be defined as a whisky distilled using batch distillation. These regulations have a heavy influence from the Scottish regulations where have seen similar cases such as the Loch Lomond Single Grain, which though being 100% malted barley is distilled in Coffey Stills, and therefore is labelled a Single Grain. 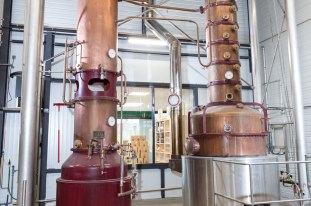 That’s not all that La Rouget is doing differently. While normally whisky maturation takes place in ex-bourbon barrels (see this article for large information on barrel maturation), La Rouget elects to mature instead in barrels previously containing straw wine (sweet wine, a Jura speciality) from Vin de Paille du Jura, which utilised grapes grown in direct sunlight (thereby increasing their sugar content). This sweet wine is barrel aged for some time after the pressing, and the sweet wine is drawn into the staves of the cask. When next filled with whisky the residual wine retained in the wood imparts some of its sweetness to the spirit. After the maturation, the whisky is non-chill filtered before bottling. Looking at the pictures, you can certainly see that the whisky looks, well somewhat gunky. Perhaps a moment to clarify what filtration is would be of some help.

After maturation, whisky is filtered, because of course it is. Filtration gets rid of the bits and pieces left over after maturation, those little lovely bits of charred barrel that float in the bottle (pick up a bottle of Blackadder to see what it’s like). With no filtration, those pieces are left to float around. So, we filter, and filtering falls into two categories: chill filtration and non-chill filtration. Let’s discuss them briefly (or for a more in depth explanation, feel free to follow this link)

Chill filtration: Chill filtration involves chilling the whisky before bottling to 4C-0C for single malts, or in the case of grain whisky lower as the oils inside have a lower concentration of fatty acids. When this occurs various elements of the whisky solidify, particularly the aforementioned fatty acids, also with esters and proteins from the distillation and maturation process. The whisky is then filtered, and these particles are removed before bottling. This ensures that elements of the whisky that would cloud when chilled are instead removed and helps prevent the build up of “sediment” in a whisky bottle that has been stored for too long, particularly in a cool place.

Non-chill filtration: conversely, filtration can occur without the chilling effect. This means that those fats and oils are retained, resulting in a clouding effect should the whisky be chill, and a sediment build up should it be kept too long on the shelf, though it is often thought that these fats and oils add to the taste, making a non-chill filtered whisky desirable to certain consumers.

There are pros and cons to each way and school of thought, though it is always annoying when you hear someone in a bar cry that their whisky has gone cloudy and much have some fault.

As we can see with the B&M Signature, the process of non-chill filtration has certainly left these fatty acids and oils in the whisky, resulting in the clouding of the whisky. Does this make any difference to the taste with this whisky? I’m glad we got to this point, because now it’s time for tasting.

The nose is reminiscent of the sweet wine retained in the wood, with dried apricots, some peaches, almond flakes all drizzled with honey, though said honey has since gone dry. A bit of crushed hazelnut comes through, with roasted capsicum atop a buttered piece of raisin toast topped with a pinch of brown sugar.

Onto the palate we get that honey and peaches we saw on the nose, then a cinnamon dusting before something new comes along the way, bits and pieces of shaved coconut, with hazelnut oil and tart raspberries, plus a tiny dollop of cream. The finish is long and tart, with hints of green apples, soft pears and figs with a tiny squeeze of lemon juice to round it all out.

I always enjoy finding new whiskies, and finding this bottle and discovering its history, and its peculiar make, was no different. I was however left a little wanting by the whisky itself; for all the flavours they seemed a touch dull and flat, a muted expression with nothing finding its way to the surface. I love the story of La Rouget. I think that their unique distillation and maturation has so much to offer. Having said that, should I chance along one of their whiskies any time soon, I’ll buy a dram first, and think long and hard about buying the bottle.