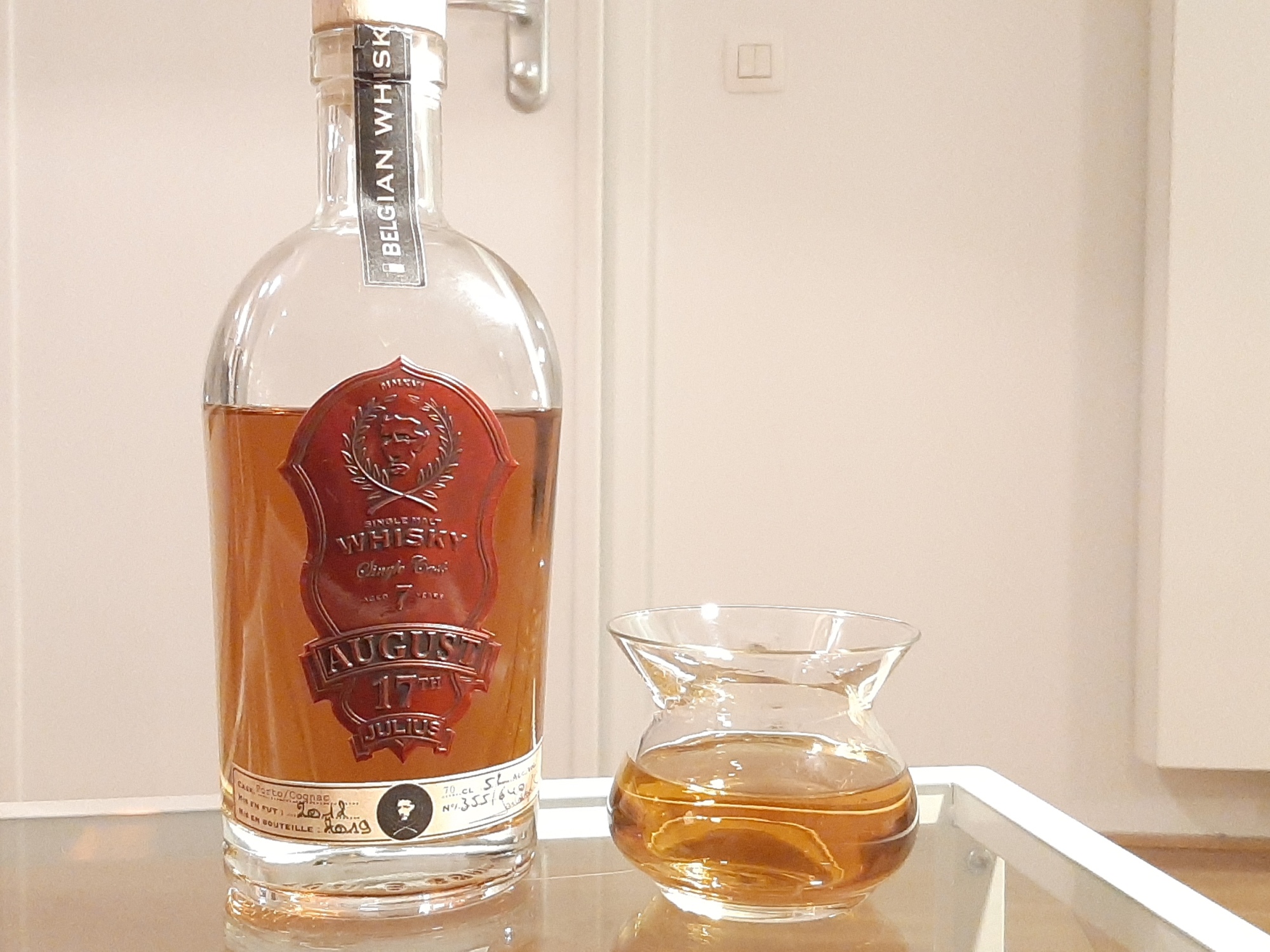 Its another Wednesday, and another round of World Whisky Wednesday is here! For those who don’t know, for the past few months I’ve been in Belgium, enjoying beer, frittes and the local whisky. Come to think of it, its not that different from when living in Ireland (though I would say Ireland does better potatoes). Being here has given me the opportunity to see much more of Europe than I previously did, and has also allowed me to visit some of the smaller areas and discover those hard to find whiskies that normally never make it out of the country! This week’s review is no different, with a very special dram; The August 17th Julius Whisky of Belgium.

Located in southern Belgium, August 17th whisky comes to us from the Wave Distil distillery in Gembloux. The distillery itself comes from the mind and work of Thierry Van Renterghem, once a promising footballer brought down by injury. During his rehabilitation and after a particularly heady night out, he explored the works of master distillers, looking for ‘the perfect vodka’. Near two decades later, Thierry took pains to realise this dream, contacting an old friend (who was then a distiller in Cognac) and bringing the vodka to life. Shortly after the initially success and upon receiving owner ship of some exceptional oak casks, Thierry turned then to the idea of the perfect whisky. With a standard line, the Brutus, well received Thierry could make more specialised releases, which brings us to the Julius.

Information on the bottling is scarce, with the Wave Distil website having precious little to go on. A few searches and chats about Belgium gained me some key facts, and its quite interesting.

The Julius is the ‘older brother’ of the Brutus, aged for 7 years, single cask, cask strength. As I have been told, the cask previously contained both Port AND Cognac, which leads me to believe that the volume of the release may be a single cask, though it has apparently been reracked from the cognac to the port. Single cask is a tricky enough term as it is, so we wont hold that against them. The barrels used are reportable ‘oak barrels from 35 years or older, some are even older than 100 years’.

Apparently, it has some subtle smoke notes brought by the malting process, though no mention of peat or turf was ever uttered, so I’m less inclined to believe that. It’s when we get to the stills that it really kicks into overdrive; Charentais Pot Still distillation. I seem to be on a roll for these, as just last week I reviewed a whisky distilled in Armagnac stills. For those unaware, the Charentais pot still is better known to English speakers as a Cognac stills. It is still a copper pot still, so distils a single malt in the case of August 17th, but I’ve generally found the distillates of the Charentais still to have less reflux, with headier tones and fumes.

It’s an all rounder when you read about it. Cognac cask, Port casks, single cask volume, single cask strength, Cognac stills and collaboration between Belgium and France, two countries that I very much admire for their distillation, be it whisky or otherwise. But a story isn’t the be all and end all to a whisky. Oh and its cask strength at 52%. The greatest story could still result in a poor whisky, and a poor story might see the great whisky you’ve ever seen. Fortunately, I bought a bottle of Julius, so I have had a long time to think all about it. Let’s dive in (for the record, I am drinking from bottle 355 of 640).

The nose is evidently fruity, picking up with some small berries, most noticeably raspberry and strawberry that starts to turn to jam, with chocolate sauce spread over vanilla ice cream before a touch of cinnamon dusting. Fudge starts to move into the glass, with a then hit of passionfruit and mango. After we see stones fruits coming into the fray, cherries, apricots and plums moving about quite pleasantly. While the whisky sits at cask strength, its not too rich for its own good, and each flavour has its own time to shine.

The palate hits those berry marks with the addition of blackberries, then into grilled figs, pineapple and a serving of black forest gateau. Tobacco starts to make its way into the mix as the cognac cask becomes more apparent, than you receive raspberry coulis, hazelnut, and a good mix of natural fruit sweetness. All in all with the palate however it doesn’t deliver as you might expect a 52% whisky to, and is a tad lackluster.

The only disappointment in this whisky is the finish, its flat. The final notes of hazelnut leave the palate and then the whisky deep dives into nothing. While it makes it attractive to go back for another mouthful, it did feel a bit underdeveloped. I guess I’ll have to drink more.

I don’t know much about Julius Caesar, though I would imagine if this whisky bears any resemblance to its name sake it could be that it has a promising start, a muddling middle and a disappointing end. It failed to deliver on that cask strength punch, could not draw enough from the Cognac and Port Casks, as well as failing to stick the landing.

But perhaps I am judging it too harshly. The world of whisky is filled with many wonders, and sometimes things don’t line up. Even with the unique distillation and aging, the bottle coming with a handwritten label and looking damn amazing, and being less than €70 I can’t help but think that a bit more time is needed for this whisky, or maybe just some smaller casks.  I am excited for what Wave Distil will do in the future, and my hope is that they iron out any small kinks but keep their experimental spirit as they grow. A valiant effort, here’s to the Julius.