In turbulent times such now, many folks are self-isolating (please, self-isolate for your own safety, but also for the safety of others). While that may be annoying and cause disruptions to work, know that World Whisky Wednesday will be continuing in the future. I’m not going away, and neither is whisky.

This week I’m looking a relatively new distillery from a country that I spoke on just a few weeks back. We’re headed to Rotterdam, The Netherlands for a look at Cley Whisky.

As I’ve stated in other Dutch whisky reviews, the Dutch aren’t really known for their whisky. While Us Heit may be one of the oldest distilleries, the most well-known is most likely Millstone Distillery from Zuidam (stay tuned over the next few weeks for that).

Cley, on the other hand, is very new. It is quite unknown but on trend with the Dutch doing things their own way.

Sitting on Overschiese Kleiweg in Rotterdam, the Cley micro-distillery (the name referring to a street name from the early 17th century) first began in 2015 with founders and owners Paul den Dulk and Maria Neves. After discovering a method and recipe for gin distillation from 1795, the two, enamoured, began their own distillery. Paul den Dulk trained first as a distiller in Hasselt before honing his skills through the Jenever Museum in Schiedam. This means that while he takes care of the production, Maria Neves looks after bottling and marketing, as well as conducting masterclasses, festivals and tasting sessions.

Starting with gin, Cley used organic grain from the surrounding regions. With an emphasis on traditional recipes, they triple distil before soaking the distillate, according to the recipe they found, in juniper, Jamaican pepper, oranges and coriander.

For the whisky it’s a different story. Cley produce two varieties with two separate bottlings: a single malt, single malt cask strength, a malt and rye, and a malt and rye cask strength – both single malts are made with locally sourced malted barley. Curiously, the rye and malt enter the fermenter together before distillation, making this more of a grain whisky using just those two grains. All the whiskeys are triple distilled before being cut with water to bring the spirit down to 60%. After that, they are aged first for three years in ex-bourbon barrels (previously containing Jack Daniels, Heaven Hill or Woodford) before a finish of at least six months in toasted virgin American oak casks.

I’ve encountered Cley twice now, first at The Hague Whisky Festival in 2019. While I was able to sample a few of there products I was only able to pick up a bottle at the Ghent Whisky Festival recently. Having a chat with Maria at the stand, I recalled my enjoyment of the Cask Strength Single Malt and picked up my bottle: number 10 from cask 127, bottled at 52%. 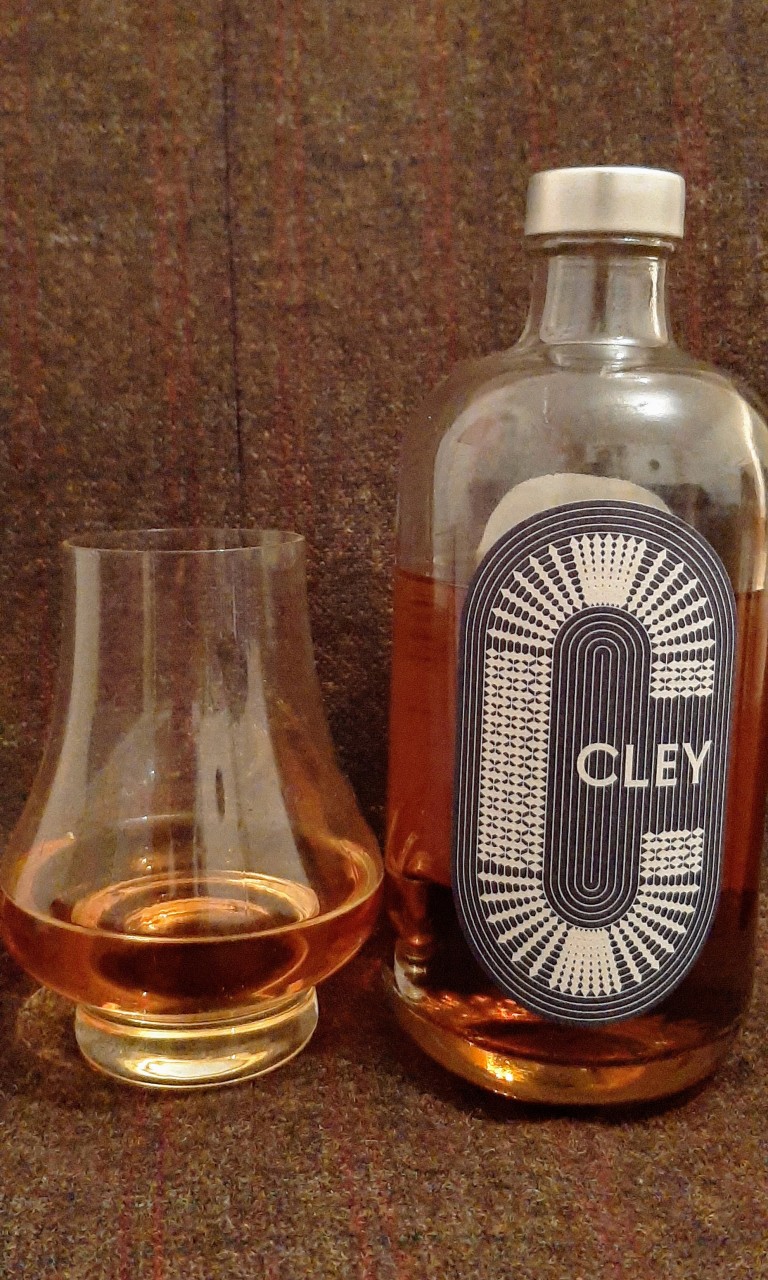 So, it’s time to have a look at this little bottle and see what flavours we can get from a young cask strength whiskey.

The nose starts well, a touch hot and prickly though not a negative factor. It opens quickly to creamy vanilla icing with butterscotch, plums, and spice atop a crème brulee. After that we get hints of a fruitier nose hiding just below with blackberries with a shot lime zest, treacle, lemon sorbet, mango cream before passionfruit white chocolate, some zest but then it falls off with a final note of somewhat tart raspberries.

The palate seems a bit of a dip downwards, tart and a bit sour, the zest of citrus coming through with grapefruit, then moving into the deeper flavours you would expect with the white chocolate recurring, almonds, lime meringue, a bit of nuts, some pecans. The fruits come back then, and the mango and plum are joined by white peaches and nectarines but the tartness returns as well, the fruits are not completely ripe and we bit too deeply into the core. The mouthfeel is fizzy and a touch peppery. Its not bad, just a touch disjointed.

Finally, though the finish carries itself well, it is disappointingly short, bringing in a nice hint of green apples with a touch of lemon juice and ginger that was unexpected but well received, but then it puckers the mouth and is immediately gone.

I’ve had better whiskey from the Netherlands. Having said that, considering the young age of Cley, it holds up well.

The structure of the whiskey is all there but it lacks a little bit of taste. I can’t help but feel that the triple distillation seems an odd choice. I see something like this as a promise that the whiskey will only get better and, if they can bring that little extra flavour in, that’s where they can find their sweet spot.

When it does, I’ll be all too happy to try it again.

This review is not sponsored or endorsed by any whisky or distillery, Cley Distillery or otherwise, and is entirely the thoughts and opinions of the author Somewhiskybloke.

5 thoughts on “What ‘going Dutch’ can do – Cley Distillery”