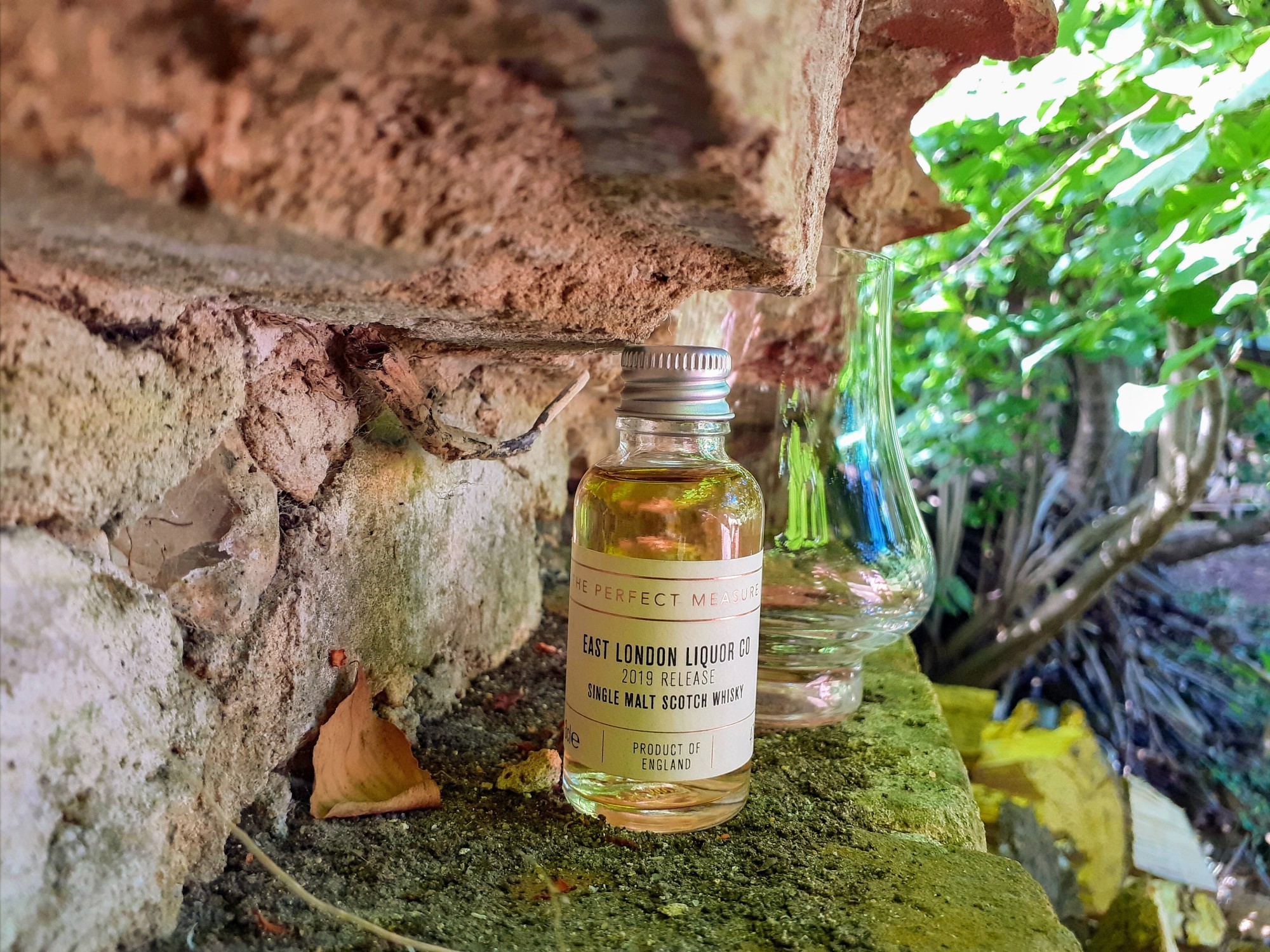 It’s funny staring into dwindling whisky supplies. I may order whisky left, right and centre, but they always seem to disappear the following day or so and I can’t figure out if it’s the lockdown blues, or if someone is sneaking some whisky from my shelf when I’m not looking.

There is something on this shelf, however, that I’ve been dubious as to whether or not I’ll enjoy it but all whiskies must one day be opened. And so, for today’s World Whisky Wednesday, I’m reviewing the East London Liquor Company (ELLC) Single Malt Whisky.

Biases are a curious thing. You read some things, you hear some things, you taste some things and you form an impression of a distillery that can set quickly and it is often be difficult to break. If you assume something will be good or bad and it follows suit, your confirmation bias is satisfied and you think all things in the future must be that good or bad. I can’t imagine the likes of De Molenberg, Starward or Penderyn releasing something I am not a fan of. I can’t imagine enjoying a sherry cask whisky too much, even while stating that Bimber and their heavy sherry cask whiskies are stunning.

It’s difficult to challenge the perceptions you have made of a distillery and their liquid, despite what you may have heard from others or even if you try something that challenge those preconceived notions.

But, why am I talking about this? Why am I dubious about this whisky?

It all stems back to the first ELLC whisky I tried: the Rye. I did not like the whisky. I wanted to, I dearly wanted to, particularly because I want to celebrate all English (and indeed all new world) whisky. Yet, sadly, it was less than enjoyable. Truth be told I finished most of the sample but had to leave it to rest and breathe and in the end poured it down the drain and that has left me with a bit of a bias towards the distillery.

In recent years, I’ve been trying to challenge any of those whisky perceptions I may have, including sampling whiskies from distilleries that I might otherwise be averse to. And it’s important, now more than ever when the world of whisky is exploding, to make sure that we try each and every whisky we can as there can be a gem hidden in there.

So let’s talk about the whisky and see if it can shift my taste-buds in a positive way… no pressure.

ELLC was founded in Hackney, East London in 2013 by independent film maker and bar tending veteran, Alex Wolpert. While production would begin in July of 2014, the distillery found themselves headline news in 2018 after a crowdfunding campaign, which started with a £750,000 target, raised £850,000 in 24 hours and finished with £1,326,450 – not bad for a crowdfunding campaign. As a second headline grab, their Rye Whisky was hailed as London’s first whisky (and I would also stipulate the first legal whisky) in over a century after the Lea Valley distillery was closed in 1903 – not that I have any inside information, you just never what some folk in Soho are up to.

Combining this with their Blended whisky and today’s Single Malt, the trio of whiskies took to the market with some excitement, especially with regard to the collaboration between ELLC and the Sonoma Distillery of California. This partnership allows ELLC access to Sonoma ex-bourbon and rye casks. Of the Single Malt, we know it’s double distilled through a pot still system, matured in ex-bourbon and ex-rye casks from Sonoma and ex-bourbon Kentucky barrels for at least three years. Bottled at 47% I’m looking at this glass and wonder what tastes it holds, so let’s dive in and see what we can find.

The nose opens with the last lemon drizzle cake left on the shelf at the supermarket, left a few days too long and the icing has started to crack as the lemon juice goes tart. Some old marzipan hovering there, some floral notes and orange zest and then turns to old honey and musk before taking a turn into a big bowl of pumpkin soup. It begins to turn vegetative and loses flavour as it starts to breathe, only turning a bit more bitter.

The palate opens with lemon again, some thick royal icing and old firm marshmallows, soft almonds and some chalky apples. Barley comes through and there’s a taste of old lager, then some mouldy peaches and it moves into white wine territory with gooseberries, passionfruit and kiwi fruit. It starts to get puckering and astringent, pulling at the mouth and taking away anything the whisky held, like licking a wooden spoon that’s been used to stir jam a few days ago. Malt biscuits, honey and oats.

The finish is short and holds a touch of prickly lemon before the alcohol comes through and washes everything out, and then it’s just nothing.

As mentioned earlier trying this whisky has taken some time. While I didn’t pour it down the drain, I would never return to this whisky as it’s just bland. The overwhelming taste is the alcohol which swiftly moves to the mouthfeel and strips you of the opportunity to taste anything else, leaving you with a glass of…. Well just a glass.

It was an improvement on the Rye, of course, but this type of incremental improvement from pouring away a dram to having something bland in the glass feels not a step forward but rather to the side.

I neither liked it nor hated it, it’s just bland. And, as has been said on this site before, being uninteresting is the worst thing a whisky could be. Oh, and I only bought a sample of this whisky. If I had paid the astonishing price of £79.95 for a whole bottle of this whisky then… Christ, I don’t know, it feels like it would’ve been an expensive paper weight.

A final thread, just a short one: in the photos you’ll note this is labelled as a Single Malt Scotch Whisky. This is of course not a Scotch whisky, being produced NOT IN SCOTLAND, and I can only think that this was a labelling error.

This review is not sponsored or endorsed by any whisky or distillery, ELLC or otherwise, and is entirely the thoughts and opinions of the authors Somewhiskybloke.