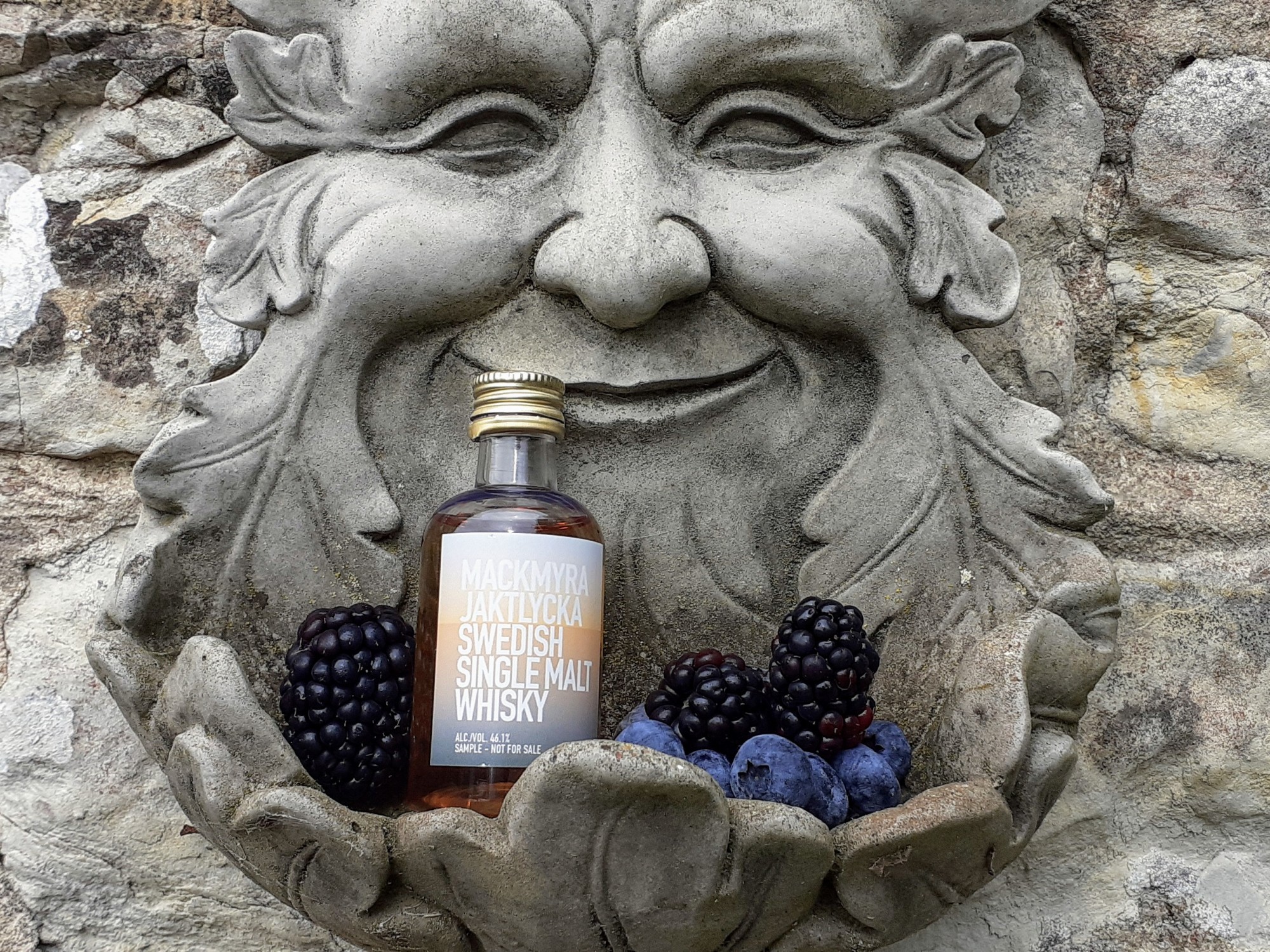 So it’s Wednesday once again and I have quite a few options covering the floor and shelf to choose from, but there was one that was burning to be selected. For today’s World Whisky Wednesday I’m having a whale of a time with the Mackmyra Jaktlycka.

Before we dive into the whisky I’d like to offer an apology to Mackmyra. I was sent this sample to join in and learn about the Jaktlycka on through a live tasting held 26th of August, though unfortunately I had to be away and could not make the tasting. To Mackmyra, and especially to Richard (if you’re not following Richard on twitter, you really should, you can find him under @MckWhisky) who sent the sample out to me, I am immensely sorry that I missed the event. You can click here if you’re are keen to watch the launch, it’s damn interesting.

Why am I sorry about that? Well it’s manners for the first part. I don’t often get sent samples, especially not by companies, so it meant a lot that this was sent out and guts me that I missed it. As for professional integrity (yes I have that on this site dammit) I let Mackmyra down by not attending the tasting. They took the time to send a sample out, I should have made sure I was able to attend.

There’s a second reason as well, and it’s that I love Mackmyra. The distillery came on to the scene twenty years ago, about the same time I was mixing coke with cheap bourbon in a packing lot and while I like to think I’ve grown in that time Mackmyra have undoubtedly grown in more profound and interesting ways.

The Whisky world is in a constant state of flux. What is standard can change at a moment’s notice, especially now as the old crowd is moving out and the new moving in, both inside and outside the industry. Heading back twenty years or so and the most exciting thing a distillery could do with a cask was some type of white wine that was untraceable, maybe an exciting finish but while there are of course outliers for the most part people were content with that easy run.

Mackmyra did things different. It’s been said so much, and done so much that it hardly needs repeating but they have been shifting, growing, changing ever since they began. The Moments series, the Intelligens, special releases, all of this points towards a company that continuously asks what can we do differently and what can we do better. In an industry that has been known to grow stagnant it’s refreshing, though right now we’ve become so adjusted to Mackmyra releasing something new and exciting that what feels ground breaking for another company feels run of the mill for Mackmyra.

So, what have the mad Swedes done this time?

Twice a year Mackmyra release a limited edition whisky that bears seasonal inspiration. Earlier this year was the Grönt Te edition, finished in casks containing oloroso sherry and Japanese green tea leaves, and the autumn release is the Jaktlycka. Translated it roughly means Happy Hunting, so let’s go hunting for some information.

I’m a nerd in many areas, but in particular (as it relates to this) I’m a whisky nerd. I also quite love excel and product sheets, and Mackmyra have always delivered on their sheets. Looking at that we can grab the following information,

That’s a lot to take in, and a lot to go into a release. It should be noted that the whisky was predominately matured in casks containing Swedish berry wine, giving it a bump of taste there, but let’s dive into that a bit. Firstly after some asking around it looks like ‘Saturated’ is a mistranslation to ‘Seasoned’, the casks in questions being seasoned with berry wine. What is berry wine?

The berry wine that seasoned three of those casks and lent it flavour come from Grythyttan Vin. Now based in central Sweden almost due west of Stockholm in Grythyttan, the story began in Per’s grandma’s house in Norway. Tasting some cloudberry jam that had been made without preservatives, a thought began to grow, why not make wine from  berries? Years would flow by and Ingunn would come on board, and the pair would create their little winery surrounded by the beautiful Scandinavian forest with a focus on climate and environmentally friendly wine production without addition of preservatives.

The wine that has given the flavour to the Mackmyra Jaktlycka is their Jakt. Made from wild blueberries and lingonberries picked from the forests in Bergslagen on a 90%/10% split, the wine is full of berry and oak flavours, passing that onto the whisky.

Some might say that this runs against what whisky should be, but an industry needs to grow to survive and Mackmyra have had a lot of growth in all areas in their twenty odd years. Older fans may recognise that name coming from Mackmyra before, and certainly a decade ago the Mackmyra Special :05 Jaktlycka was released, but that was a decade ago and unrelated to the product.

So for all that information and talk that goes into the story behind the whisky and behind the wine, whisky really only comes down to one thing, if it tastes good. So let’s pour it into our little glass and have some happy hunting looking for flavours. Maybe we can find some secrets of the Scandinavian forests….

The open on the nose reminds me of being back behind a bar making all different types of cocktail syrups, there’s raspberry and blue bonbons, toffee apples and somewhat of an ashy backing with chunks of sugar pulsing through the dram, stewed guava and slightly burnt gingerbread. Lollipops and some sprightly floral sherbet roses with mint, berry jam, crusty croissants, parma violets and musk sticks. Can you make Tokaji from blueberries? This dram gives puts me in that state of mind.

The palate follows up with some tingling fruit, all those berries of the forest. Logan berries? Check. Blueberries? Check. Black and raspberry? Yeah they’ve found there way there too and then some oak seeps in a tiny touch before a dollop of honey covers it. The dram continues with spice, predominately ginger and nutmeg, pineapple, green apples, rock melon and apricots but it’s all a day or two before they’ve ripened, still slightly firm and a touch tart. Still it holds plenty of fruit fizziness and the finish brings in a nice somewhat smoky backing, the spice starts to rule until we can taste a smoky gingerbread man with a grapefruit helmet dashing away through our mouth, a nice end to the dram.

I am at a crossroad with this whisky. The nose was brilliant and had me laughing over how much I could get, bringing back all sorts of memories and serving to annoy my partner to no end as I was chatting about different cocktails. The palate, unfortunately, didn’t seem to do it justice. Now don’t get me wrong, it’s still great, but the fruit being just under ripe had the dram landing a little firm in the mouth with an added level of citrus I wasn’t prepared for.

When it’s all said and done, this is a good whisky. This is a great whisky. I would love to try this in different cocktails, an Old Fashioned, potentially a take on a Bramble, maybe a Blood and Sand. As it’s the autumn release I wonder how this will taste during winter, and am curious to try it nice and warm next to a fire, but the Jaktlycka is not one of Mackmyra’s better whiskies, it is one of Mackmyra’s above average whiskies. While this puts it head and shoulders above most other distilleries above average releases and still sets a high benchmark, I am not as excited for this as I have been other Mackmyra releases.

If you’d like to find out more about Mackmyra, consider heading to their website here. They have plenty of fine whiskies which you can browse here, I’d recommend the Intelligens and the Fjallmark.