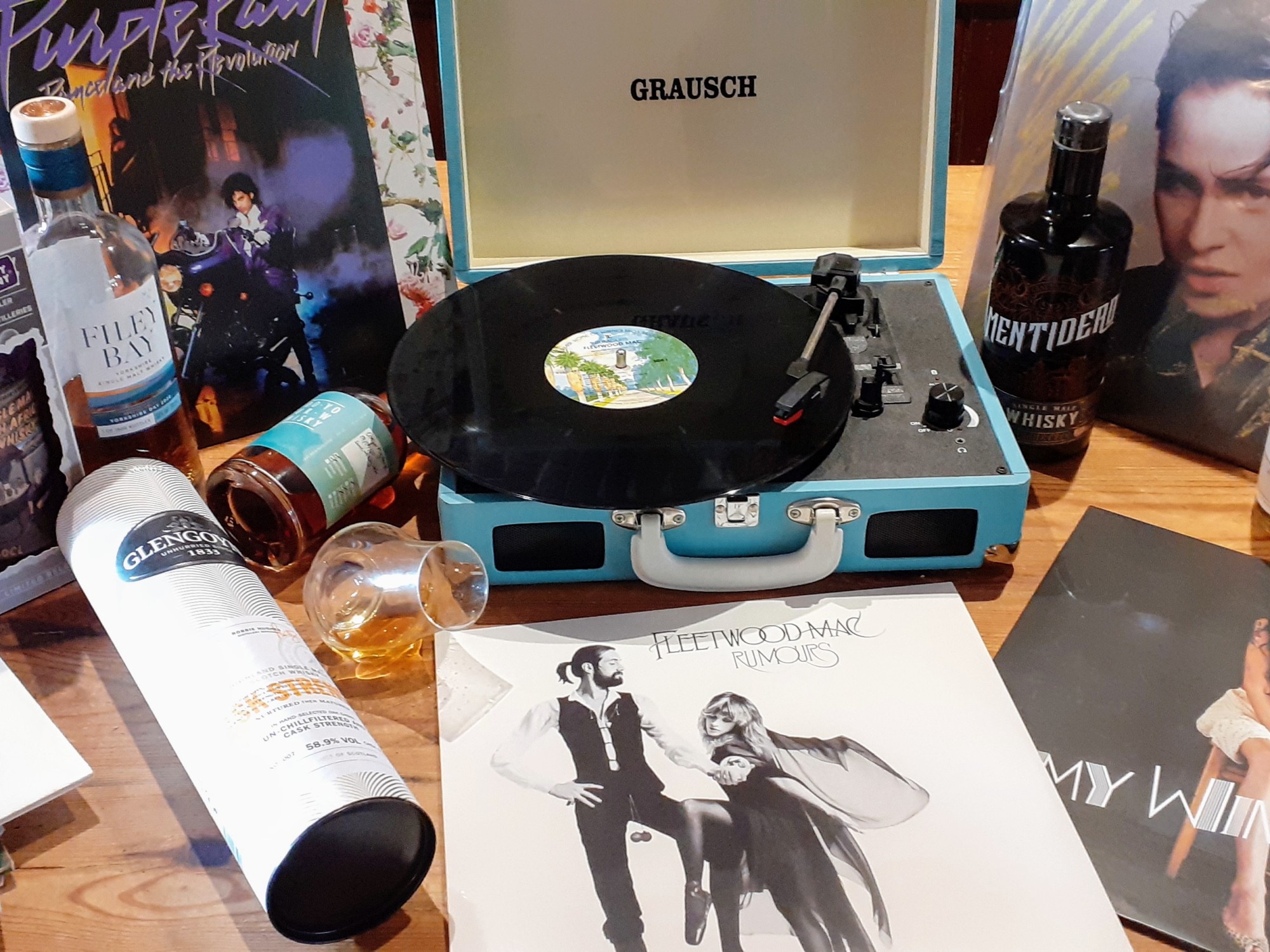 Everyone loves music. Who hasn’t forgotten what to say on a date and as the silence fell dared breathe the dreaded line ‘So, do you like music’? I never have, I can tell you that. Don’t ask my partner for clarification on that, I certainly have never said that (Citation needed). But everyone loves music.

It can be an expression of love, joy, rebellion, pain, anger, encapsulating all of our emotions and feelings and gifting them back to us from the mind of an artist. And chances are if you’re reading this article then you like whisky too.

I am included in that broad spectrum of everyone that loves music. I can’t play anything, I am well known to break instruments by looking at them but I love the stuff. The Jam, Hilltop Hoods, Nina Simone, 10CC, Nirvana, Jimmy Barnes, Cold Chisel, Dire Straits, Seth Sentry, Jack Johnson, Downsyde, Bonobo, The Box Tops, music from many different countries, ages and genres.

I love whisky too, I started Somewhiskybloke to showcase a wide variety of whisky that people never look at and hope that people have searched out these small distilleries and given them their business, but listening to a tune recently I wanted to talk about the two together. That tune and dram that point me in this frame of mind? Carry on Wayward Son by Kansas and an 8 year old Port Askaig.

Let’s take a moment here and acknowledge those who have taken this and run with it, This Is My Dram is a stellar podcasts that deserves a listen and a follow.

So why am I talking about this if people have done it better than me (and for the record they have done it amazingly, once again it’s This Is My Dram)? Well this is the whisky world and I love writing about things I love, whisky and music being two of those things.

With that whisky love and the background I have I’ve attended, organised and run a huge variety of tastings, pairings being the ones I love best. Whisky and meat, whisky and beer, whisky and the previous occupant of its cask (the name for that one never worked) but a whisky paired with music tasting I ran was always one of my favourite.

So how do you pair music and whisky? It’s not easy but it is easier than you think. Approach it with the same frame of thought you approach other pairings. Doing a peat and meat tasting you might pair a bresaola with a Bowmore, in whisky and beer maybe a stout with an Ardbeg or a Glentauchers with a wheat beer so we just change that over to music.

The question of how to pair music to whisky is something else. We want to find the heart of a whisky, let’s say a peppy, spritely young ex-bourbon cask and pair it with something to match, though that music itself won’t necessarily be peppy and spritely. It’s likely to be something from along those lines but not always.

Selecting the exact dram and exact tune is a dream, the idea of building a perfect playlist to take a room of people through five drams, the nose, palate and finish of each whisky each corresponding to a different tune is something I think is well worth seeking out.

So let’s start with the basics. Filing any one whisky into a genre of music would take years given the fact that there are over 1000 genres of music, so we do some broad strokes. Take your whiskies with deep tones, rich flavour and heavy palates. These could be your classical music whiskies, your blues, your soul music whiskies. Yes these are different categories but we’ve taken a broad chunk of whiskies, each of these fitting into different genres.

Failing this we could run an evocative method, a whisky that is deep and mournful could work with music of the same tune. A discontinued bottle or one from a silent, closed or demolished distillery could work with music from an era past or from an artist sadly passed. Aforementioned bright and peppy with the bright and peppy, music that makes you feel good and gets the spirits raised (no pun intended).

There is always the forth option; gather your bottles and music collection together in room and start playing songs at random, listening through an album before you switch whisky. I’m not telling you to lock yourself in a room with naught but music and whisky but it sure seems preferable to the current state of the world.

When it comes down to it it is most definitely, more so than any other pairing, down to individual taste and preference, but sharing your personal taste and preferences is fantastic. Imagine if someone had never told you about peated whisky and asked you to try it, imagine someone had never told you to listen to The Rolling Stones. Sharing our experiences and preferences is half of the whisky community is about, so let’s bring music into the fray and have a blast with it.

To get the ball rolling I’ve made some examples pairing here. And while these are individual that doesn’t mean their right or wrong. There is no right or wrong in music or whisky, it’s all up to the listener and the drinker.

The most famous surfers song is Dick Dales Misirlou, but I grew up listening to Drapht, especially after a surf. Taking care of my board and waxing it was a fact of life, and the smell of waxing the board over a few drinks was always accompanied by this tune. The whiskey perfectly encompasses the scents and feeling of that time and tune, but could just as easily swing with Maundz Possibilities.

Can’t get a bottle of the Lambay Malt Blend? Roe & Co and Old Pulteney Huddart are great alternatives, they work with the song, they’re surfing whiskies to go with a surfing tune, and all the whiskies are easy enough to work into a cocktail. Summers gone but the surf is still here, give it a try.

Catherine Feeny’s Mr Blue is a brilliant tune with another independently bottled whisky. It breezes in, light and easy like a spring day and always helps put a grin on the face, however tired. Sprightly piano, a scratching record note at the beginning, some type of easy mandolin or ukulele (not a musician) and it just kind of pulls the listener away. It’s a song that’s just easy, comforting and relaxing. So what else would we pair it with other than this equally as pleasing and relaxing ex-bourbon cask?

If you’re struggling to find that Glentauchers than go for either the Auchentoshan 12 Year Old of a Tomintoul 16, both have a sweetness about them that work to bring a small smile to the face and distract you, just for a little while.

Thirteen sitting in a park, sipping wine casks
Watching whole cars as they went flying past
I couldn’t paint so I rhymed to the writers
They’d laugh, light up a smoke, and get blinded by their lighters

Growing up working long hours through multiple jobs this song and the lyrics resonated with me. Instead of wine casks I turned to whisky, initially Jack Daniels, Jim Beam, Johnnie Walker and then anything and everything. Not to say this song is cheap, that’s just what I drank at the time. Nowadays it’s the Australian budget alternative, easily found but still fantastic and worth serious consideration.

If I could I’d spend my days drinking various whiskies while listening to this and smoking while in my favourite bar, but that bar no longer exists, smoking at the bar is now generally frowned upon, Covid says I can’t spend all my time in bars and money is a thing. Can’t find the Two Fold? Grab a bottle of Makers Mark or Powers Johns Lane instead, they work as good sit down slugging drams.

Low deep music that rides parallel to the waves that the whisky creates. This tune is especially versatile but I feel the addition of sherry, especially heavy sherry, into the mix makes for a great sit down dram. Lock the doors, close the blinds, turn the music up and enjoy.

A sherry bomb for a sherry song, the 105 is easy enough to find but if that doesn’t float your boat go for the Aberlour A’bunadh, now up to the odd 75th batch. If you’ve got money to burn grab the Glengoyne Cask Strength, it’s pricey but a damn fine whisky.

Nina Simone’s cover of Janis Ian’s 1974 original is a classic, slow, mournful, and flaring with ambition and a journey for acclaim before the fading of a star that burnt itself out. The whisky follows suit, muggy and enveloping with a sad realisation that once the whisky is finished that’s it, this was a limited single cask and no longer available so we treasure it while it lasted and then treasure the memory.

The 31.34 is a 28 Year Old Isle of Jura, ex-bourbon barrel finished in Red Wine Casks, impressively smokey and the song of a whisky on its last legs giving a final flare of flavour and life to the world.

Can’t find that particular limited release? This is the song that breaks the bank, try it with an Octamore of any variety to get the deep smoke, or if you have no care for money crack a bottle of Ardbeg 17. Then send me some, that’s one of my favourite whiskies. Failing that the Port Charlotte Heavily Peated is easily a great substitute, and is achievable for most people.

Five banging tunes paired with five banging drams each with a back up or two. Music and whisky are incredibly linked together, both bring joy, both everyone loves and chances are you discovered them both when you were young. The importance of both these things is that they are enjoyed by you, the drinker and listening, no matter who, what, when, where or why.

More importantly though this is a simple list that works for me. Should you have the whiskies then sit down, crack each in turn and listen to each song as in depth as you listen to each whisky, but when all is said and done it’s different to each person.

Write a comment, write an email, let me know what song you pair with what whisky. It could be for any reason, you think the song and the dram go together, you grew with them both, you’re holding a dram and listening to the song right now.

Let me know what music and whisky you pair and give me a reason why, but as long as it make sense to you that’s what matters. We’ll speak to you soon folks, I’m gonna go try and pair Eminence Front to a whisky.