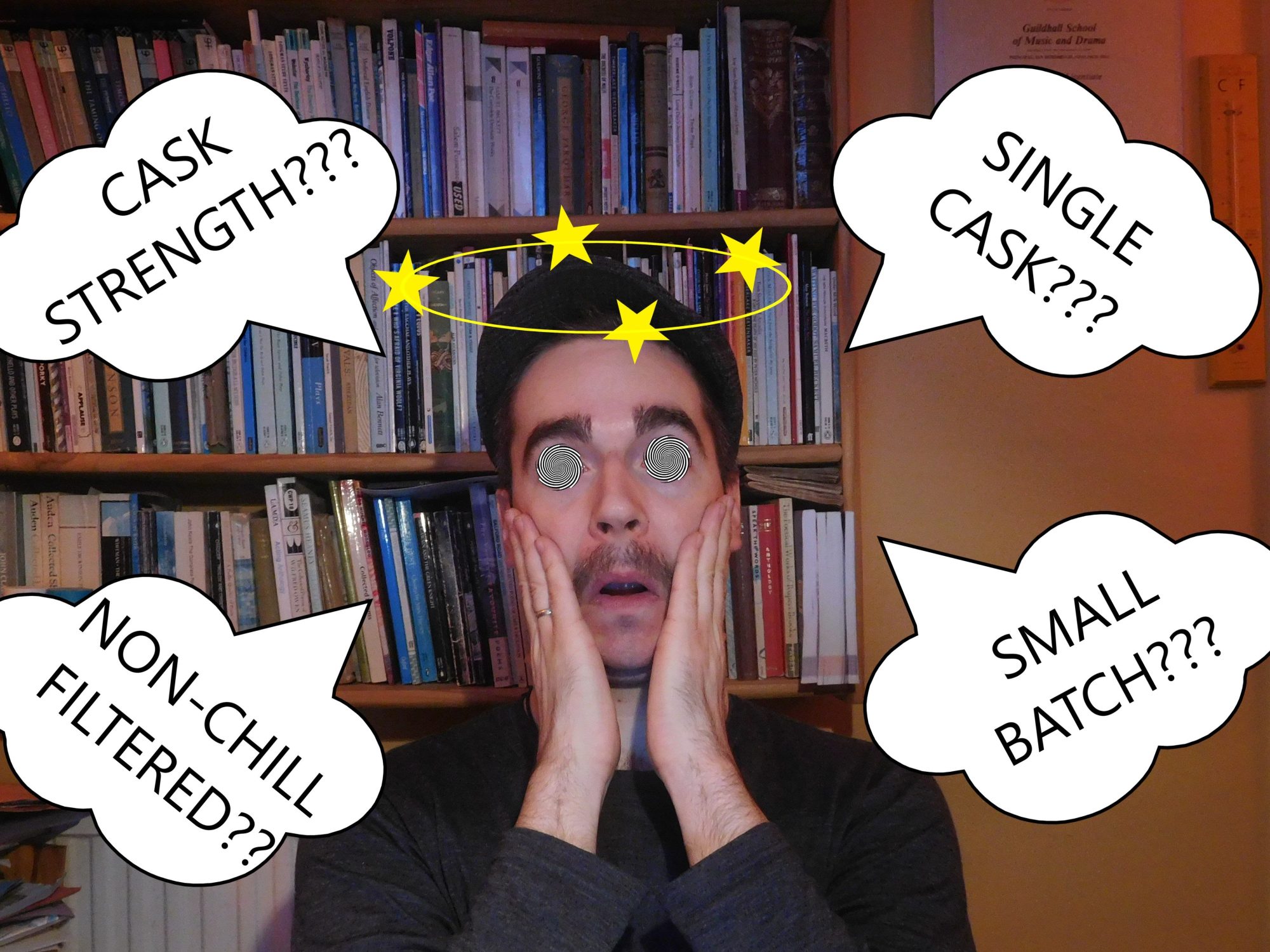 Christmas is coming and with it comes the harrowing pressure of buying a gift for your whisky-loving loved one.

In times past, you could journey into a whisky shop (or bottle-o’s as we call them in Australia) in your quest for whisky. Almost as soon as you entered the shop attendant (or Spirit Guardian as they should be known) greeted you before you let them know you know a thing or two.

You would march up and down the shelves, your smile slowly receding as you are greeted with various phrases: Single Malt, Single Cask, Cask Strength, Sherry Oak, Finished, Reracked, Blend…

What the hell do these phrases mean?

Back in the day, your Spirit Guardian would let you know everything, from the hottest thing on the shelves to finding the perfect gift. Nowadays things are different and while we want to support our local stores that often means shopping from home, isolating and keeping yourselves and others safe.

Bereft of their knowledge, you can be greeted with a host of unfamiliar phrases and words so, to make it a bit easier on you this Christmas, I’m doing all the work for you.

This is your guide to reading a whisky label.

1 – Branding/Distillery: this denotes the distillery or the brand in question. Should it be a distillery, there will be somewhere on the label stating (distilled at ‘X’ distillery), should it be an independent bottler their branding will be prominent.

3 & 4– Year Distilled and Year Bottled: some bottles will not state their age, rather the year distilled and the year bottled. This may sometime be referred to as the vintage. As a bottle that is labelled as 12 years old may contain older whisky, having the reference of year distilled and bottled helps as you can be sure how old the whisky in your bottle is.

5 – Alcoholic content: This tells you the alcohol by volume of the whisky. Normally this will be between 40%-46% and this tends to be enough to satisfy the accountants while also making whisky approachable for the consumer. It’s important to note that the specific bottling point is decided by the distillery and is often chosen to showcase their whisky at its best.

There are whiskies, usually called ‘Cask Strength’, that are bottled at the strength that the whisky stands at when it comes out of the cask without any reduction by water. These can stand anywhere from 40% to the high 60%, depending on the age and where the whisky is matured. While this is prized by some, it should be noted that whisky is not better in general at a higher or lower percentage, it is down to the specific distilleries.

6 – Size of bottle: how much whisky you have in your bottle when sealed and full. European standard bottles will be 70cl/700ml, other areas have different sizes.

7 – Type of whisky: this tells you what style of whisky you have. While there is an extremely large amount of whisky styles, the most predominant ones are as follows:

8 – Type of cask: the cask/s that this whisky was matured in. As a general rule of thumb, people expect certain flavours from different styles of casks; ex-bourbon barrels tend to be vanilla and caramel forward, ex-sherry is dried fruits and spices, ex-red wine is heavy fruits.

Reracked means the liquid was ‘reracked’ to that cask aka the liquid moved to that style for a large period of time after it’s initial maturation in the first cask.

The term ‘finish’ means that the whisky was ‘finished’ in that style of cask, so the liquid was moved into it for anywhere up to around two years before being bottled.

The term ‘Single Cask’ is an odd one. Normally it refers to the fact that the whisky within the bottle has only been matured in a single cask. This means that the whisky has spent the entirety of its life in either an ex-bourbon, ex-sherry or some other style of cask, though recently the term has been used to designate a ‘Single Cask’ amount of liquid, ‘cask’ in this case not being a measurement of size but short hand for barrel. For instance, 200L of spirit may have been matured in first an ex-bourbon then an ex-sherry, while this means the whisky has been in more than one cask or barrel type it means that there is only a ‘cask’ worth of whisky.

9 – Region/Country/Area: Regions are a Scottish method of geographical designation. Historically they would be used to distinguish between taxation and flavour, however the flavour difference is no longer as present with the exception of the Islay distilleries. While this is disappointing for some to hear, the fact that a whisky is distilled in one location does not inherently change the flavour, given that the barley, stills, casks and workers can be sourced from all over.

The country informs the drinker of the country of origin (obviously). Scotch from Scotland, Irish Whiskey from Ireland, Australia Whisky from Australia and so on. For the more discerning consumer, this can tell you more about the whisky style, though generally it is more seen as a selling point.

10 – Batch Information: if present, this will tell you how many bottles there are available of the whisky. It could also contain a batch number, telling you that there are multiple batches of this whisky available (such as the Bimber pictured). This is often used alongside the tagline of ‘small batch’, a piece of industry jargon that means very little. As the size of the batch is based on the size of a distillery, the larger distilleries would have a much larger small batch than that of the smaller distilleries. It can also tell you if this batch was part of a limited series.

12 – Natural colour: Here we reach something that will always cause controversy, the colour of the whisky. Before bottling whisky can legally have an artificial colouring added, called E150. This deepens the colour of the whisky, sometimes causing the whisky to look older than it does. What should be mentioned is that this does not alter the taste and flavour of the whisky (except in extreme cases). Many a whisky ‘expert’ will deride a whisky due to having artificial colouring added, but if that doesn’t alter the taste and you know it contains the colouring then no one comes to harm.

While it would be good to have the practise abolished as the natural colour of whisky is astounding, it needs to be said that the colour of whisky is not indicative of quality. You can read more about this in my Whisky SCAM article but let’s just say it again here: something darker does not mean it’s better.

That really sums up most whisky labels you will see. While this guide can help you, knowing the complete lexicon of whisky is something few people have mastered. As such, while you should always get a bottle of whisky for your loved one on Christmas, why not get them something else too?

Whisky has many resources but understanding whisky is incredibly important. You can see my list of the top five whisky books that every whisky lover should own, but to understand everything on the label you can’t go past The Whisky Dictionary by Iain Hector Ross. It is an amazing resource for understanding everything about whisky, and in having the common words it also lists the rarer words and phrases, such as this random Moffat Meisur.

The more you know… I might pour myself a Moffat Measure now.

If you’re going to get someone or yourself some whisky, Master of Malt and The Whisky Exchange are always brilliant, but consider supporting the smaller guys this Christmas.

If you’re in the Republic of Ireland, consider both L Mulligans Whiskey Shop and Celtic Whiskey Shop.

If you’re in the UK try Nickolls & Perks, The Good Spirits Company, Royal Mile Whiskies or Wally’s of Cardiff.

This review is not sponsored or endorsed by any distillery and is entirely the words of the author Somewhiskybloke.